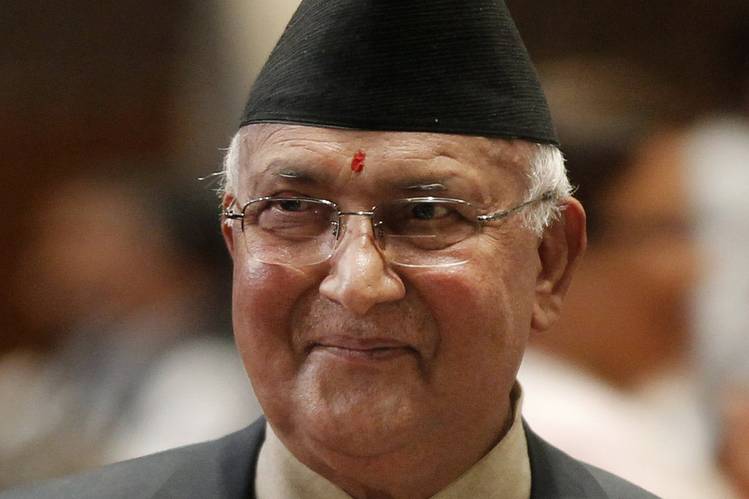 Nepal’s Prime Minister K. P. Oli resigned on Sunday seeing the writing on the wall that his main coalition partner ‘Maoist’ leader Prachanda has struck a Faustian deal of power-sharing with the main opposition party Nepali Congress in a political conspiracy with domestic and external ramifications.

The Indian media is awash with references and innuendos to the key role New Delhi may have played to promote the ‘regime change’ in Kathmandu.

The triumphalism in the Indian capital is reminiscent of the ‘regime change’ in Sri Lanka an year and a half ago where, too, the leitmotif was the ouster of the perceived ‘pro-China’ leadership of President Mahinda Rajapakse in Colombo.

In the short term at least, New Delhi is a ‘gainer’ insofar as Oli, who was riding a virulently nationalist platform with animus against India, has been ousted.

New Delhi would hope that as Kathmandu slides into political uncertainty, hopefully, Beijing will rethink the efficacy of the visit by President Xi Jinping to Nepal mooted for October, which might have consolidated the ascendancy of Chinese influence on that country.

Playing musical chairs in politics is a heady experience. If Oli used to be New Delhi’s proxy in an earlier era, he been lately the Pariah for being ‘pro-China’.

On the contrary, if New Delhi used to regard ‘Maoist’ leader Prachanda as China’s cats-paw until fairly recently – it blesses today his proposed leadership of the new government in Kathmandu.

What role India would have played in getting Prachanda to dump Oli and instead join hands with the traditionally ‘pro-Indian’ Nepali Congress remains unclear, but the triumphalism in New Delhi suggests that it played a decisive role behind the scenes.

The power-sharing deal between Prachanda and Nepali Congress leader Sher Bahadur Deuba, a foxy seasoned political weathercock who is close to India, envisages that he would rule as prime minister for some 10 months whereupon the latter will take over.

In sum, the dialectics between the vaulting political ambitions of Prachanda and Deuba sets the tempo for Nepal’s troubled politics for the months ahead.

The fluidity suits India fine, since Nepal’s ‘hung’ parliament – carved out principally between Dueba’s 207 MPs, Oli’s 181 and Prachanda’s 83 MPs – becomes a happy hunting ground for New Delhi. But the big question remains: To what end?

New Delhi is drawing comfort that China is still on a learning curve as regards the working of ‘bourgeois democracy’ in Nepal and lags far behind India. Indeed, the present government led by Prime Minister Narendra Modi has made a fine art of usurping power in opposition-run state governments within India itself and is at the moment systematically undermining the opposition government in Delhi state.

The Modi government, which does not subscribe to the culture of political tolerance, finds it intolerable that Nepal rejects Indian tutelage.

Besides, there is the ‘China factor’. In Modi era, the testy, competitive Indian policy toward China is steadily transforming to one of rivalry bordering on enmity. Tensions are rising.

The government recently disclosed that heavy armor (100 tanks) has been deployed on the mountainous Ladakh region of the disputed border with China where a jostling is going on between the two armies to occupy the vast, vacant, contested space at inhospitable heights (where former Indian prime minister Jawaharlal Nehru once said not even a blade of grass grows.)

Alongside this ‘forward policy’ on the disputed border, India just gave notice that three personal belonging to Xinhua news agency must leave, including the bureau chiefs in Mumbai and New Delhi.

On its part, China has voiced concern over the level of violence in the state of Jammu & Kashmir where Indian security forces have killed over 45 Kashmiri protestors voicing separatist demand, and have put the region under blanket curfew.

This first-ever Chinese statement of concern pertaining to the situation in the Indian state of J&K is a subtle but stunning reminder that China too is party to the Kashmir problem. It comes at a time when Pakistan intends to raise the violence in J&K at the UN Human Rights Council in Geneva.

Indeed, the Chinese statement came in the wake of an articulation of concern by the United Nations Secretary General over the situation in J&K – and, most importantly, it follows a remark by US State Department spokesman naming India, Pakistan and Kashmiris as the relevant parties to the dispute (which is a nuanced formulation that Washington has not used for a long time.)

Be that as it may, New Delhi is mistaken if it believes that there can be a government possible in Kathmandu, which is ‘pro-India’, while will also be ‘anti-China’. As a leading Indian expert on Nepal politics Dr. S. Chandrasekharan wrote in the weekend, “The atmosphere in the (Kathmandu) valley is such that there is no one who speaks well of India.”

Clearly, from New Delhi’s perspective, if Nepalese politics remain fluid, it becomes easy to manipulate the government in power in Kathmandu and even disrupt the steady development of China-Nepalese relations.

But then, the ‘regime change’ in Colombo last year was also predicated on a similar mindset that the new leadership of Ranil Wickremesinghe, the ‘pro-West’ prime minister, would roll back Sino-Lankan relations.

Curiously, however, the exact opposite is happening today with Wickremesinghe affirming recently that Colombo welcomes trade and investment with China and is even open to Chinese submarines calling on Sri Lankan ports.

He has revived all Chinese projects finalized under the previous regime of Rajapaksa and is discussing new deals.

The point is, countries such as Sri Lanka or Nepal get enamored of Beijing’s Belt and Road Initiative because they regard China as a driver of growth for their economies and estimate that in the multipolar world setting, partnership with China helps them to balance with India’s intrusive policies.

Thus, Prachanda, the prime minister-in-waiting, is only going to inherit Oli’s legacy of promoting Nepal’s ties with China.

Second, New Delhi must tread carefully in exploiting the deepening instability in Nepal. An unstable Nepal, increasingly lawless, could become a revolving door for Tibetan militants to undertake subversive activities across the border with China, adding to Beijing’s security concerns.

Again, latent separatist sentiments in Nepal in the so-called Terai region, inhabited by people of Indian origin, may come handy for New Delhi to leverage political influence in Kathmandu.

But using militancy and terrorism as instruments of regional policy is a dangerous enterprise. India’s searing experience with Sri Lanka cannot be forgotten. The blow-back caused the death of a thousand Indian soldiers and assassination of a former prime minister. The experience with Nepal cannot be any different.

At least, a sliver of sea separated Sri Lanka from India. Whereas, Nepal borders two of India’s most problematic states – Bihar and Uttar Pradesh – populated by 300 million people where state machinery is barely coping with accumulated problems of poverty, illiteracy, unemployment, corruption, and caste and religious divides.

Nepal’s stability can be a matter of common interest for India and China. But Modi government, seething with the spirit of intense rivalry vis-à-vis China, is unlikely to explore that path.

Ambassador MK Bhadrakumar served as a career diplomat in the Indian Foreign Service for over 29 years, with postings including India’s ambassador to Uzbekistan (1995-1998) and to Turkey (1998-2001). He writes the “Indian Punchline” blog and has written regularly for Asia Times since 2001.