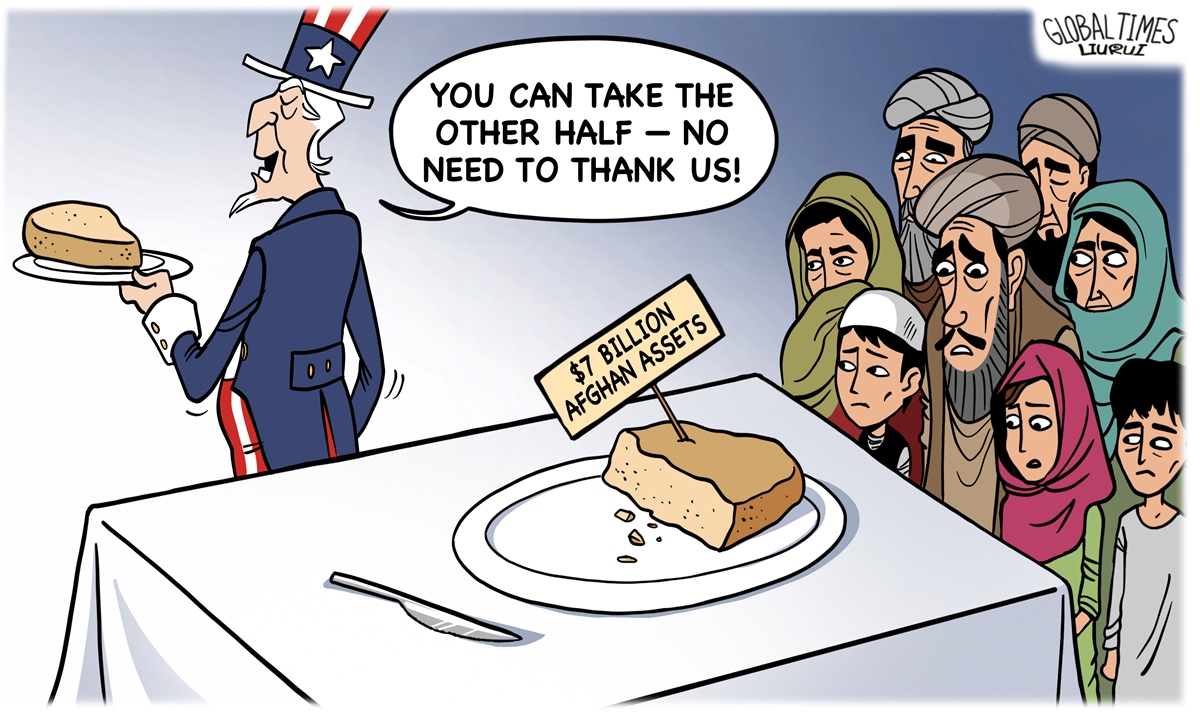 Global Times (16 February 2022) – The Afghan Taliban warned on Monday that it would reconsider its policy toward the US if the latter does not reverse its “unjustified” decision to embezzle Afghanistan’s assets deposited in the US. Last Friday, President Joe Biden signed an executive order freezing $7 billion in Afghan funds held in the US to distribute the money as the US sees fit. Half of the assets will be used to compensate victims of the September 11 attacks, while the other half will be used to set up a trust fund “for the benefit of the Afghan people.” The move has not only triggered strong indignation in Afghanistan, but also caused an uproar in the international community.

After the US froze the assets of the Afghan central bank last year, the international community expressed widespread concern, because the US has, in the past, frozen the assets of other countries without justification, which resulted in humanitarian crises. However, what the US did has gone beyond people’s imagination: Instead of giving back the money, the US distributed it arbitrarily. Worse, the $3.5 billion for 9/11 victims is equal to putting in the US’ own pocket.

The US has no right to arbitrarily dispose of other countries’ overseas assets through its domestic law, be it “freezing” or “direct distribution.” They lack legal basis and are immoral. A barbaric act that the most powerful country in the world blatantly loots the assets of one of the poorest countries can even happen in 2022. This once again reminds the international community that the financial hegemony in the hands of the US is a dangerous and destabilizing factor for the world, and should be stopped.

Seven billion dollars is not a big deal to the US, as it can probably buy three B-2 bombers. But to the Afghan people, it means saving lives. Deborah Lyons, the UN special representative for Afghanistan, warned that freezing Afghanistan’s overseas assets will “set Afghanistan back for generations.” Now over half of the Afghan people are suffering extreme hunger and millions of children are dying from malnutrition and being left untreated, while education and social services are on the brink of collapse. Stealing the Afghan people’s money at this time, won’t the conscience of US politicians hurt? In other words, do US politicians still have a conscience?

If American politicians still have the basic humanity to recognize that “the lives of the Afghan people are also lives,” they should not take away Afghans’ hope to survive. In particular, the US, as the initiator of the Afghan crisis, has the primary responsibility and obligation to aid the Afghan people. Statistics show that during the Afghan War, more than 30,000 innocent civilians were killed by the US military or lost their lives due to the war, and about 11 million ended up refugees. Shouldn’t the US take a portion of its $700 billion defense budget to compensate the Afghan victims?

Countries such as China, Russia and Pakistan have condemned the US for withholding the Afghan life-saving assets, while those Western countries that often tout human rights and rules have remained silent. Exacerbating suffering of Afghan people, the US has exposed once again that the so-called rules-based international order does not defend the weak and the just, but maintains the rules and orders of major powers and hegemony.

We strongly condemn the stealing by the US of Afghan assets. We call on more conscientious countries, international organizations and individuals to stand up and condemn the US, forming the strongest political, moral and public opinion pressure to urge the US to return the money unconditionally that belongs to Afghanistan. We also call on the UN to uphold justice for the Afghan people, and take back the life-saving money as soon as possible to resolve the unprecedented humanitarian crisis in Afghanistan.

No matter what, this is the debt the US owes to the Afghan people, and the US has to pay it back one day.