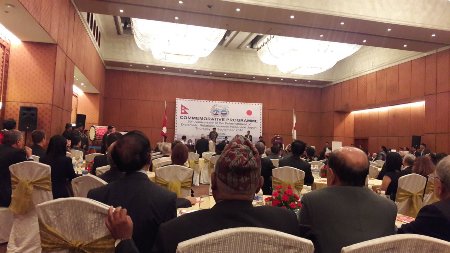 The Ministry of Foreign Affairs feels immense pleasure in hosting this commemorative event to mark the 60th Anniversary of the establishment of diplomatic relations between Nepal and Japan. On this special occasion, I extend a warm welcome to all of you and especially to our distinguished guests from Japan.

The presence of the Rt. Hon. Prime Minister of Nepal, and so many other important personalities in this programme underscores the importance we attach to our relations with Japan. Likewise, we are delighted to have with us H. E. Mr. Nuobo Kishi, Minister of State for Foreign Affairs, representing the Government of Japan. This is a testimony of importance given to Nepal by the Government Japan.

In the annals of Nepal-Japan relations, today is an important day; a day to celebrate the formal journey which we have successfully treaded upon for the last sixty years.

These last sixty years have been the years of mutual trust and cooperation. Cooperation–which has contributed to the socio-economic pursuit of Nepal. Cooperation- that traverse through wide areas –including agriculture, infrastructure development and human resources development. Cooperation has been fruitful for both.

Political relations have always been warm and friendly. Economic relations have been beneficial to both and stand to offer much for our mutual benefit. In the last sixty years, our relations have made significant progress –in scope as well as substance, in outlook as well as opportunities. The two countries have worked closely–at bilateral, regional as well as multilateral levels. Exchange of high-level visits has further enriched our relations.

However, our relation dates back far longer. Cultural and historical linkages have connected our two countries and people for centuries. Buddha’s eternal teachings have travelled far and wide. His teachings have inspired and shape the civilization of both of our countries immensely.

Japan has achieved an impressive record of economic development. The ingenious people of Japan have made their country a pioneer in innovation, and one of the largest economies of the world. The economic leap of Japan is exemplary.

Nepal has undergone fundamental transformation in her political landscape. Peace-process is exemplary. Promulgation of Nepal’s constitution by an elected Constituent Assembly last year is a milestone in our history. Inclusive political participation, federal structure, provisions of strong local government, comprehensive fundamental rights and rule of law are some of the salient features of the constitution. The implementation of the constitution with the support of the all stakeholders is the key priority for the government. The government is sincerely working towards this end.

Japan has always remained as one of the largest and reliable development partners of Nepal. Our pursuit for socio-economic development has gained significant impetus from the development assistance provided by Japan, along with the dispatch of trained experts and Japan Overseas Cooperation Volunteers. Most significantly, unconditional and carefully chosen areas of support have helped to enhance growth and inclusive development. Japan’s cooperation has been helpful for the modernization of Nepal’s agriculture, infrastructure development, aviation safety, school sector reform, human resource development and many other sectors. I like to make special mention of B.P. Koirala highway. It has significantly contributed to connectivity needs of eastern part of Nepal. It has open tremendous economic opportunities especially in adjoining areas. The just concluded economic cooperation agreement during the current visit of His Excellency Kishi to construct road tunnel connecting Kathmandu valley will significantly enhance connectivity.

Japan remains an important destination for Nepali students to pursue higher studies. The scholarships for university course including the JDS scholarship which was launched in 2015 have been vital to develop the human resource in Nepal. Japan’s education system inculcates the students with a rigorous work ethic, which Japan is identified with. It instills the ethos of innovation, which Japan is overwhelmingly famous for.

Nepali nationals working and studying in Japan have contributed in deepening people to people relations between two countries. They are also learning from work ethics and technology of Japan. They are bringing this knowledge back to Nepal.

Relations between Nepal and Japan are not limited to bilateral framework. Both the countries have interacted closely through the regional forum of SAARC, to which Japan is an important observer country.

United Nations provide another significant platform for close collaboration of our two countries. Both of our countries attach high importance to the UN peacekeeping operations. Japan has also been providing ODA through UN agencies and International Financial Institutions, including the World Bank Group and the Asian Development Bank.

We share many common concerns and we have similarity of views on many regional and global issues of importance. We share similar views on threat of terrorism and proliferation of nuclear weapons.

When the devastating earthquake struck Nepal in April last year, Japan extended immediate support. The prompt dispatch of relief and rescue teams and emergency relief material is a testimony of close friendship between our countries. Japan’s substantial pledge to assist Nepal in post-disaster reconstruction demonstrates the strong bond of relations.

As the reconstruction drive has gained momentum, we strongly believe that Japan will augment the level of assistance.

Nepal-Japan relations are not confined to governments alone. The harmonious relations, goodwill, and mutual admiration between the people of both countries remain the soul of our relations.

Majestic mountains, natural bounties, rich cultural mosaic make Nepal an attractive destination for Japani tourists. We must further explore to increase the inflow of tourists from Japan to Nepal. Nepal is in need of further inflow of tourists from Japan more than ever, as our economy is struggling to recover from the devastation caused by earthquake.

Trade and investment are the enabling factors for economic development. They stimulate the economy, connect the markets and drive the development trajectory. To make trade beneficial to both, responsibility lies on our collective efforts. We believe that enhanced market access to Nepali products in Japan together with simplification of the procedures and standards, relaxation of the rule of origin and support for capacity building will help expand Nepal’s exports, thereby contributing to grow our economy.

To conclude, I am confident that this special year would be instrumental in further promoting our multi-dimensional relations in the days to come. Capitalizing on the cordial political relations we have been enjoying for last sixty years, our pursuit must be to promote economic and commercial ties consistent with the trends of our time.

Our best wishes will always remain with Japan and her people for their continued progress and prosperity in the years to come.

(Speech delivered by Minister for Foreign Affairs at the commemorative event to mark 60th Anniversary of the establishment of Diplomatic Relations between Nepal and Japan, organized by the Government of Nepal at Hotel Hyatt Regency on Sept. 1 2016)