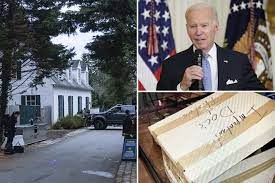 (ANI): United States Justice Department conducted a 13-hour long, extensive search in President Joe Biden’s home in Wilmington and seized six more classified documents, some of them were from the time when he was in the Senate and others from his eight-year tenure as Vice President, president’s personal attorney announced on Saturday night, The Washington Post reported.

After conducting an extensive search in Biden’s home, six classified documents were found including personally handwritten notes, files, papers, and binders that covered decades of his work and his personal attorney described them as “documents with classification markings and surrounding materials.” The Justice Department also took some of Biden’s handwritten notes from his vice-presidential years to further review them. “In the interest of moving the process forward as expeditiously as possible, we offered to provide prompt access to his home,” Bob Bauer, a lawyer for the president said. Interestingly, both the current and the most recent former president have had federal agents extensively search their properties as special counsels investigate the handling of classified information, according to The Washington Post.

Earlier, on January 9, Biden’s special counsel confirmed that classified documents from his time as vice president were discovered in a private office space and turned over to the National Archives in November, reported CNN. Though the first documents were found on November 2, the news was not publicly revealed until last week when US-based television broadcasting company CBS reported their existence. Other documents have since been found at Biden’s home in Wilmington. Attorney General Merrick Garland assigned the US attorney in Chicago to review documents marked classified that were found at the Penn Biden Center for Diplomacy and Global Engagement in Washington, two sources with knowledge of the inquiry told CBS News. The documents are from President Biden’s vice-presidential office at the centre, sources said. CBS News learned the FBI is also involved in the US attorney’s inquiry. Attorney General Merrick Garland asked the US attorney in Chicago to investigate the matter, a source familiar with the matter told CNN, and congressional Republicans are also taking notice.

Federal officeholders are required by law to relinquish official documents and classified records when their government service ends. “The White House is cooperating with the National Archives and the Department of Justice regarding the discovery of what appear to be Obama-Biden Administration records, including a small number of documents with classified markings,” Richard Sauber, special counsel to President Biden, said in a statement. “The documents were discovered when the President’s personal attorneys were packing files housed in a locked closet to prepare to vacate office space at the Penn Biden Centre in Washington. The President periodically used this space from mid-2017 until the start of the 2020 campaign. On the day of this discovery, November 2, 2022, the White House Counsel’s Office notified the National Archives. The Archives took possession of the materials the following morning. The discovery of these documents was made by the President’s attorneys,” Sauber added.