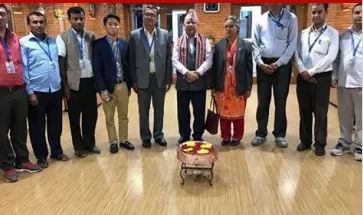 Nepal Foreign Affairs (KATHMANDU, 31) –  Senior leader of Communist Party of Nepal Madhav Kumar Nepal on Thursday night left for the United States of America to participate in the Nepali National International Convention to be held from August 31 to September 2 in Chicago.
Nepal is scheduled to hold talks with Nepali artists and personalities living in the US and Canada on the sidelines of the convention. The Association of Nepalese people in Mid-West America, the

Association of Nepalese people in South-East America and the Nepali Association, America are the co-organisers. Nepal will return home on September 5.