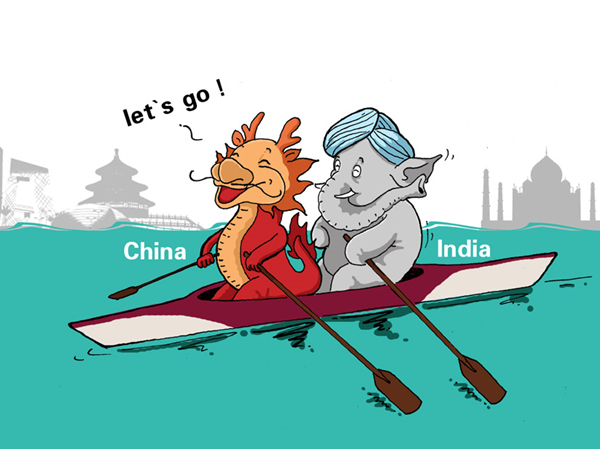 By Niranjan Sahoo (4 March 2017) –  In assessing the recently concluded China-India strategic dialogue, the common expression “glass half full and glass half empty” can come very handy. While this crucial dialogue between two neighbors was viewed very positively by the officials of both countries, the usual crowd, especially India’s strategic community, security experts and media analysts with some exceptions, choose to paint the outcomes of the meet in extremely negative terms. They termed the much publicized dialogue “nowhere talks” and “meaningless rituals.” What makes it worrisome is the fact that some analysts and opinion makers have had their verdicts out even before the officials exchanged a word on many contentious bilateral issues.

While the pessimists evaluated the entire deliberation through the narrow prism of two irritants: China’s continued reluctance to back India’s entry into coveted Nuclear Suppliers Group (NSG) and name Jaish-e-Mohammad chief Masood Azhar in the sanctions list under United Nation Security Council Resolution 1267, the optimists of China-India relations found the day-long dialogue very promising and full of positive takeaways. To them, notwithstanding these irritants the dialogue was conducted in free and frank manners and there was an atmosphere of cordiality and genuine acceptance of each other’s sensitivities and concerns.

While a few contentious issues, particularly India’s NSG membership and Masood Azhar case, saw no major breakthroughs, the host country expressed its readiness to engage in the debate. This made India’s Foreign Secretary to note “On the NSG issue the Chinese side underlined that they were open to India’s application for membership but they had their view of procedures and processes and these were somewhat different from where we are at the moment and where we think most of the group is at the moment.”

Further, two neighbors expressed common concerns on evolving geopolitical disruption and policies and approaches followed by President Donald Trump. Both countries agreed to hold “substantive discussion” to strengthen “a stable and open international system” in a time of great volatility.

As a proof of maturity in the relations, Chinese officials were appreciative of India’s role in Afghanistan. They expressed their “admiration” for India’s work on development projects particularly Salma Dam in Herat.

On the whole, the strategic dialogue saw a positive convergence of Chinese and Indian interests on range of global issues particularly Iran, Afghanistan, free trade, open international system among other.

To sum up, the outcomes of the strategic dialogue between two ancient neighbors combining more than one-third of humanity should not be gauged by a handful of irritants. Never forget the fact that the two neighbors have not had durable successes in resolving border disputes since the 1950s. Yet, the relationship between two close neighbors has been through dramatic transformation in the last two decades. Not only now India and China are members of BRICS, G20, Shanghai Cooperation Organisation (SCO) and East Asia Summit, they deliberate and exchange views more often than any point of their bilateral history. In a period of less than three years, President Xi Jinping and Prime Minister Narendra Modi have met on record nine occasions. These are unmistakable signs of thaw in China-India relationship.

The right way to further strengthen the relationship is to work on positives and pay no heed to these critics. Incidentally, the two large neighbors are world’s economic powerhouses, but the annual trade turnover volume is a meager $70 billion. The way to soar up the relationship is steer exchanges and dialogues to work on thrust areas such as smoothening of trade cooperation, easing business environment, greater flow of goods and people. This does not mean both countries should not engage in sorting out contentious bilateral issues. They must, but positive elements should drive the relationship. In this regard, the recently concluded strategic dialogue is a step forward.

This article has been posted in China.org.cn on March 4, 2017. Niranjan Sahoo is Senior Fellow, Observer Research Foundation, New Delhi.