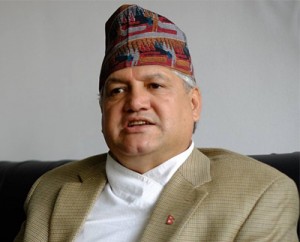 The minister who visited New Delhi to take part in the Economic Times Global Business Summit, held the sideline meeting with Indian Prime Minister Modi. Modi had expressed hope that Nepali parties would be able to promulgate the new constitution in consensus by Jan 22. The duo held discussions on ways for further strengthening Indo-Nepal bilateral relationship.

According to a statement issued by New Delhi-based Nepal embassy, the Indian Prime Minister expressed interest on Nepal’s latest development in the constitution making process.

During his two-day visit, Minister Thapa held a meeting with his Indian counterpart Dharmendra Pradhan on Jan 19. During the meeting, the two ministers particularly discussed about petroleum and gas supply to Nepal.

On the occasion, Minister Pradhan assured the government of India’s cooperation and support in this regard. “The duo also discussed about the increase in the quota for supply of LPG from 29,000 MT in January 2015 to 30,000 MT from February 2015,” read the press statement.

The ministers were agreed on sending a team from India to Nepal for the feasibility study on the construction of LPG and Natural Gas pipeline between Nepal and India as well as developing petroleum storage capacity in Nepal, the embassy said.

Minister Thapa also met with the UK Minister of Energy and Climate Change and discussed about the cooperation in the field of renewable energy particularly solar energy and wind energy. Wrapping up his visit, Minister thapa returned home on Jan 19.