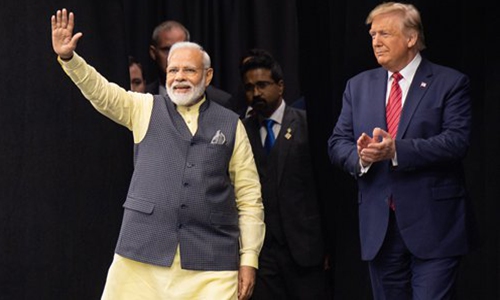 By Global Times (23 February 2020) – US President Donald Trump will pay a state visit to India from Monday to Tuesday. It will be his first visit to India since assuming office more than three years ago.

Compared with his recent predecessors, Trump has paid fewer visits to foreign countries. Trump is a pragmatist who has no interest in ideological concepts that have portrayed the US as the world’s biggest democracy, so he would visit other countries only when there is actual benefit to gain.

Over the past few years, India has been an important weapons market and has the potential to import more arms in the future. To gain more access to India’s weapons market, the Trump administration used the threat of sanctions against India over its arms deals with Russia.

According to Indian media reports, New Delhi finalized a $3.5 billion defense deal with Washington ahead of Trump’s visit. This is a very big gift India has prepared for Trump. But from a long-term perspective, and considering Modi’s “Make in India” strategy, India is more likely to cooperate with the US if Washington offers to jointly produce weapons.

Another objective of Trump is trade. Since Trump took office, he has launched several trade wars with major trade partners, and India has been one of the targets. Trump not only labeled India one of the world’s “highest taxing nations,” but also complained that outsourcing services in India were costing Americans jobs.

Since 2018, there have been trade frictions between India and the US, though they resulted in limited impact. In June 2019, the US ended India’s preferential trade status, triggering the Indian government’s retaliation by imposing 120 percent tariffs on 28 American products. These tit-for-tat trade moves greatly harmed bilateral ties.

Still the US looks to India’s economic prospects. Normalization of US-India trade ties will help US companies gain a greater share of the promising Indian market. India also hopes the US market and investment will boost its own economy. Restoration of India’s preferential trade status with the US will be Modi’s key goal in his meeting with Trump.

The US defense secretary and secretary of state have traveled to New Delhi to lobby India, but India’s notion of this strategy differs a lot from the US idea. India will shape its own Indo-Pacific strategy based on its own interests and needs.

Now that Trump is traveling to India, we should expect that a confident and strategically independent India will not change its stance, especially taking into consideration that Trump’s plan offers few benefits to India.

Another agenda item during the meeting between Trump and Modi will be Iran. With the US and Iran seemingly edging close to war, Trump needs India’s cooperation to reinforce sanctions against Iran, while India hopes the US will allow India to purchase Iranian oil. It remains to be seen how Trump and Modi will make a deal on this topic.

Moreover, wooing New Delhi to contain Beijing has been Washington’s default tactic since the George W. Bush administration. After Trump assumed office, curbing China’s rise became a more prominent part of US foreign strategy, and the US needs India – its natural ally – to fall in line. For example, US Secretary of State Mike Pompeo has repeatedly attempted to persuade India to shut the door on Chinese high-tech giant Huawei as a supplier of 5G equipment.

Unlike during the Cold War era, however, when the US enticed allies with economic, military and security assistance, Trump is not offering India any real great benefits. Instead, he has been exerting pressure on India in trade, arms sales and many other fields. In the face of an increasingly ambitious and confident India, Trump’s visit might achieve certain results, but is unlikely to draw India completely over to the US side.

The author is director of the Center for Indian Studies at China West Normal University and research fellow at the Charhar Institute. [email protected]