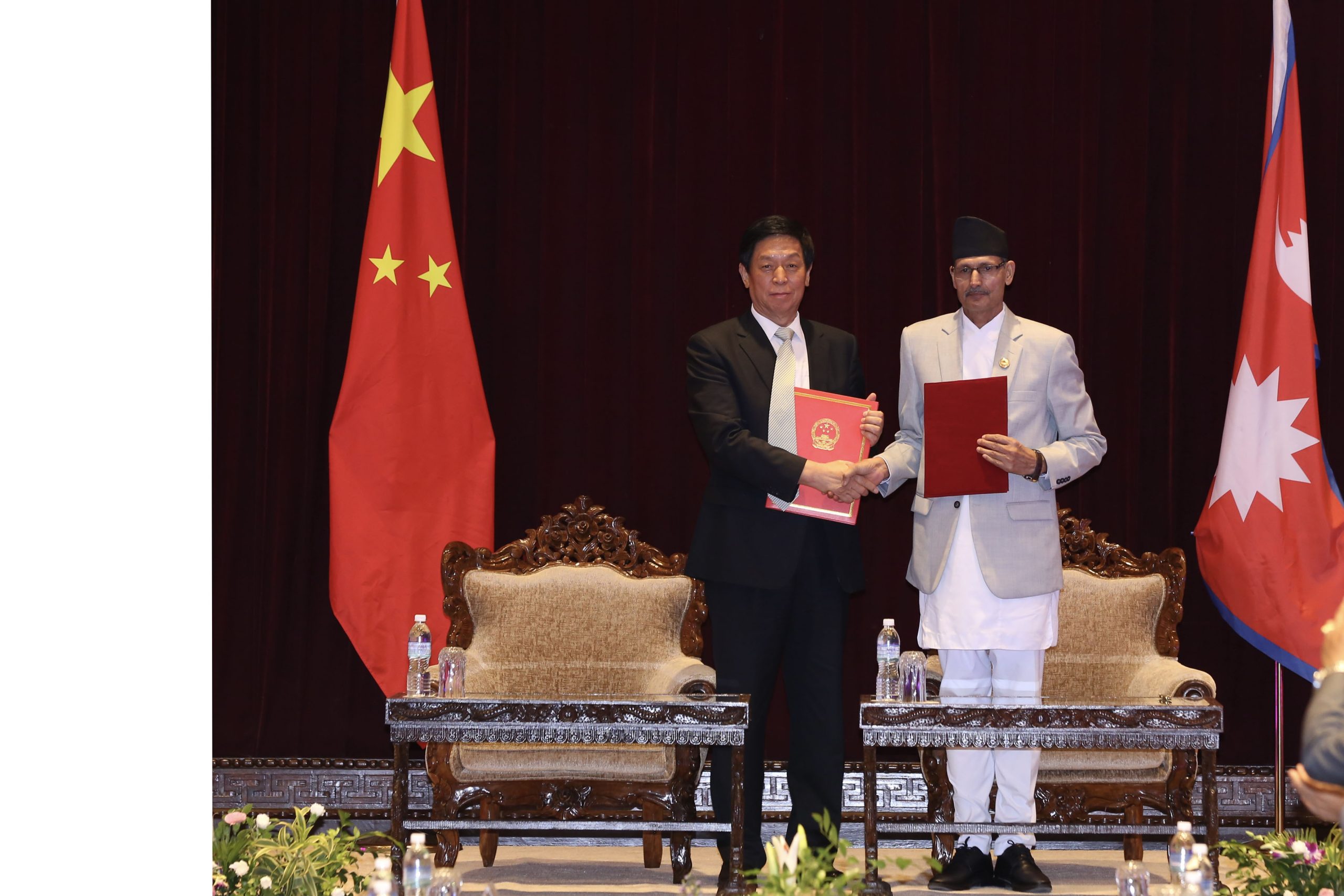 Bhismaraj Ojha – A Memorandum of Understanding (MoU) on Inter-parliamentary Cooperation between Nepal’s House of Representatives (HoR) of the Federal Parliament and National People’s Congress (NPC) of the People’s Republic of China was signed on Monday in Kathmandu.

Following a meeting, HoR Speaker Agni Prasad Sapkota and the Chairman of the Standing Committee of the NPC of China Li Zhanshu signed the six-point MoU on inter-parliamentary cooperation as per the agreement made in the bilateral talks, Spokesperson of the Federal Parliament Secretariat Dr Rojnath Pandey said. Likewise, the Ministry of Foreign Affairs said both sides agreed to further strengthen inter-parliamentary exchanges and cooperation and also underscored the role of Parliamentary Friendship Group in each other’s parliament in further promoting goodwill and understanding between the two legislatures.

NPC Chairman Li promised to provide assistance to the Nepali Parliament as per its need and requirement at the institution level. The two dignitaries also exchanged views on the importance of implementing connectivity infrastructures, including under the Belt and Road Initiative. As per the MoU, both sides have agreed to strengthen and develop mutual trust, respect each other’s sovereignty and territorial integrity and respect each other’s social system and development paths and support each other’s key interests and crucial concerns. MoU to come into effect from the date of signature Both sides have agreed to strengthen cooperation under the framework of international and regional parliamentary organizations including Inter-Parliamentary Union (IPU) on matters of common interest. The MoU will come into effect from the date of signing by both parties and it has been agreed that it will be valid for a period of five years.

In addition, it is mentioned in the MoU that it will be automatically renewed for another consecutive term unless any side gives notice in writing about the termination of the MoU six months prior to the date of expiry of the MoU. The purpose of the MoU is to further strengthen the existing bilateral relations and cooperation between Nepal and the People’s Republic of China and to deepen mutual trust and exchange of assistance for the mutual benefit of the two countries and their people. The MoU was signed to reaffirm the decision made between the Government of Nepal and the Government of the People’s Republic of China during Chinese President Xi Jinping’s visit to Nepal in October 2019 to enhance the friendly bilateral relations into a strategic partnership of cooperation for development and prosperity.

According to the Secretariat, a MoU was also signed to strengthen friendly relations and cooperation between the House of Representatives of Nepal and the National People’s Congress of China. Any dispute that arises in relation to the interpretation or implementation of the MoU shall be resolved through mutual consensus. Furthermore, any modification or amendment to the MoU shall be adopted through written consent of both parties. English copy shall be valid in case of any dispute The MoU signed in Kathmandu in the two original copies was signed in Nepali, Chinese and English languages and each language were signed in two copies. All copies signed today in all languages would be equally authentic and if there were any dispute, the English version of agreement would be considered valid, it was mentioned in the agreement.