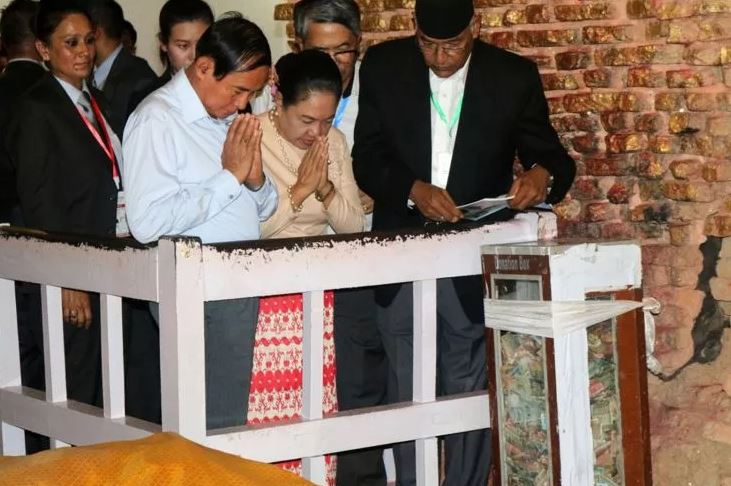 President Myint visited the Mayadevi Temple and acquired information about the marker stone- the stone with Siddhartha Gautam’s footprint. Archaeologist Basant Bidari informed him about the temple, Lumbini long term plan, and the related history and archeology.

The guest attended special prayer in the temple premises. He was assisted in praying by the Buddhist gurus.

During the special programme organized in honour of President Myint at the Mayadevi Temple, Minister Adhikari expected that Myint’s visit here would boost development of Lumbini in a planned manner.

Nepal is devoted to developing tourism with the development of Lumbini, Minister Adhikari said, adding that the number of pilgrims in Lumbini was increased in the recent decade. It would be further augmented in the coming years, he hoped.

He reminded that the Myanmar’s Prime Minister had taken important steps in holding the historic 5th and sixth Buddhists’ conference in his country dominated by the Buddhist population- more than 88 per cent of its total population.

Furthermore, Minister Adhikari stated that the high-level leadership visits between the countries since the establishment of diplomatic ties between Nepal and Myanmar in 1960 has contributed to further augmenting the ties between these two countries.

The Minister shared that Lumbini, enlisted in the UNESCO World Heritage Sites list since 1997 too has a Buddhist monastery inside it and a total of 2,500 Buddhists visitors from Myanmar had visited in the last fiscal year.

The visiting Myanmar’s President Myint took part in the prayers and observed the artistic Myanmar’s monastery in the Lumbini following the visit to the Mayadevi Temple in the Lumbini.