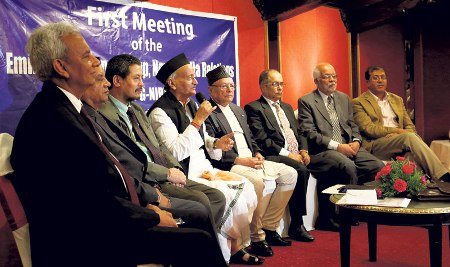 Nepal Foreign Affairs (13 December 2018) – There was an euphoria when the Eminent Persons’ Group (EPG) on Nepal-India relations was formed two years back.

At the backdrop of the bilateral relations reached in the lowest ebb resulted through the Indian blockade, the announcement of EPG itself was new beginning for new normal relations.

And, the EPG came out with the common report in the given time frame. Every meeting had the happy ending. All the members of EPG had felt a sigh of relief after coming out with the report without any obstructions.

But six months passed, the report has not been received by both the Prime Minister. Two member of EPG Nepal side – Nilamber Acharya and Rajan Bhattri- have been appointed respectively – Ambassador of Nepal to India and Foreign Affairs Advisor to Prime Minister Oli.

Similarly, the members of Indian side- have gone back to their  respective duties. But the report so far has been stranded in the expired secretariat.

Sources have informed that India has not responded positively in the repeated requests from the Nepal side. Nepali Foreign Minister Pradeep Gyawali had focused his meeting with Indian counterpart Shusma Swaraj in the sidelines of New York UNGA meeting on EPG report. He requested Minister Swaraj to arrange the time of Prime Minister Modi to receive the report.

It can be assumed that Prime Minister Modi could be busy in Indian assembly elections run up to the 2019 Lokshaba for securing his second consecutive time. But 10-minutes to sit with the EPG can be managed considering the importance of the report.

Due to the India’s indifference to the report, doubts have been surfaced whether New Delhi is really thinking to define the relations in the changed context.

Nepal government today formally expressed its dissatisfaction to Indian side for pushing the report in backburner.  The Spokesperson of Nepal government in regular press conference, Minister for Information, Gokul Banskota said Nepal was waiting Indian side the for necessary proceeding to submit the report.

The reliable Indian sources have said that Prime Minister Modi could hardly manage time to see the EPG before the Lokshaba election in 2019 April. Five months is still there to hold the election. After the election, there is no guarantee that Modi will continue rule the India since the result of three assembly elections have indicated otherwise.

Therefore, the fate of the historic EPG is unknown adding further woes to Nepali side. Is Prime Minister Modi really serious about defining Nepal-India relations in the changed context?

Prime Minister Modi should respond with action not with rhetoric.