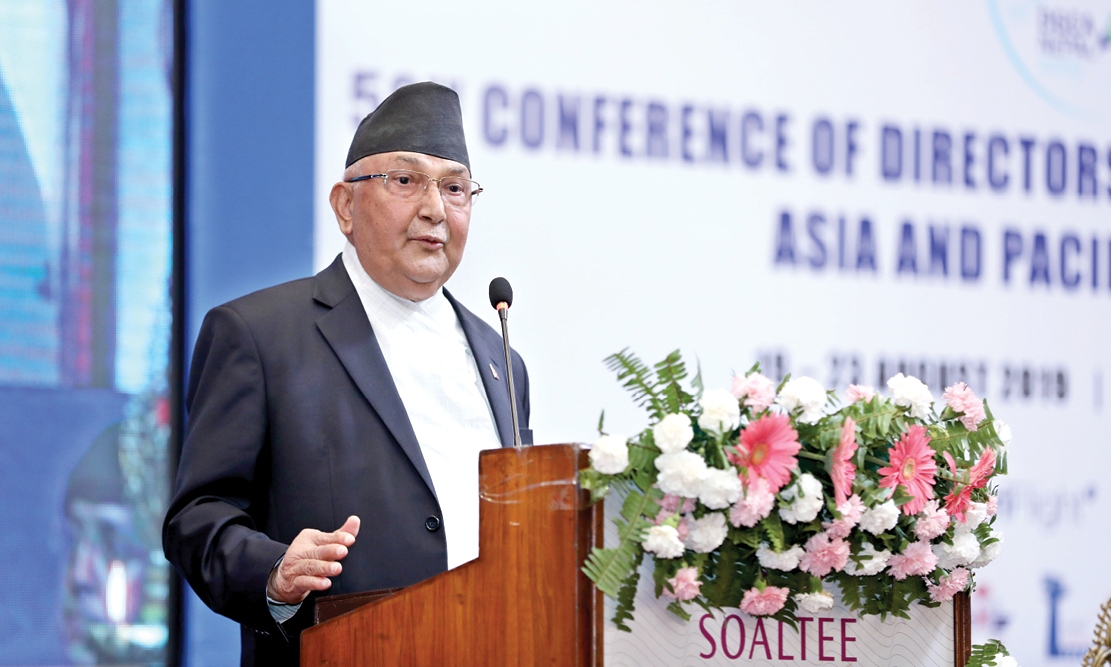 Nepal Foreign Affairs (KATHMANDU, 20 August 2019) – Prime Minister KP Sharma Oli said on Monday that Nepal was keen to establish the image of a secure destination of the world for the promotion of tourism.

Inaugurating the 56th DGCA Conference of the International Civil Aviation Organisation (ICAO) in Asia Pacific region in Kathmandu today, the Prime Minister said that the country was effortful in increasing its connectivity across the globe for the promotion of tourism.
“Thousands of tourists visit Nepal every year to see its natural beauty, heritages, mountains and wildlife, therefore, we are focusing on increasing our connectivity across the globe to attract more tourists,” the Prime Minister said.
He said that the country would now achieve a rapid economic growth as the period of struggles for achieving political stability ended.
“The era of economic development and prosperity has begun after the promulgation of the Constitution from the Constituent Assembly and the end of political instability,” the Prime Minister said.
“We will now start the journey of economic prosperity and development. We will cooperate with the international community to achieve this goal by amending some inappropriate laws,” the Prime Minister said.
In a different context, the Prime Minister urged one and all not to ruin the name of one-horned gainda, calling it rhino. “The original name of the popular and endangered animal is gainda, not rhino,” he said.
Similarly, the Prime Minister also urged the participants to call Mt. Everest ‘Sagarmatha’ as per its Nepali name.
Prime Minister Oli said, “Nepal is not only a beautiful country but also rich in various natural resources. “We should be able to make this country developed by utilising these resources properly,” the Prime Minister said.

Minister for Culture, Tourism and Civil Aviation Yogesh Bhattarai said that Nepal had made significant improvements in the air safety area, especially in air service infrastructure and air navigation.
Nepal is the supporter of open sky policy, he said adding, “Therefore, we believe in the rights of all to have flights across the globe as per this policy.”
He said that the government had started the legal process for dividing the Civil Aviation Authority of Nepal (CAAN) into two organisations- regulatory and service provider.
Chairman of ICAO Council Dr. Alumuyiwa Benard Aliu said that Nepal could benefit through the development of tourism sector which was possible through the improvement in its aviation sector.
He said that the ICAO had given due priority to policy improvement and utilisaiton of technology to enhance the quality air service across the globe.
In the five-day DGCA Conference that kicked off in the capital today, around 400 foreign delegates from 43 nations of the Asia Pacific region and from 26 promoter organisations and others are participating.The theme of this year’s DGCA conference is ‘Harmonising Efforts to Meet Capacity Constraints’.
Director Generals of Civil Aviation of Asia pacific region, chiefs of regulatory authorities of European Union, representatives of regulatory authorities United States, Britain and France, and representatives of Boeing and airbus are participating in the conference.
In the conference, the delegates will discuss on around four dozens papers relating to aviation safety, security, capacity, air navigation, economic development and air transport, aviation and environment, technical and regional cooperation.
Civil Aviation Authority of Nepal (CAAN) is organising the conference as a member of the International Civil Aviation Organisation (ICAO).