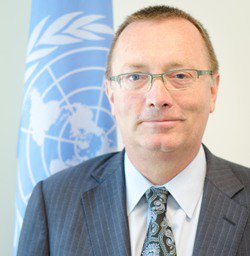 The UN has been keeping close eyes on all most all political upheavals in Nepal over the years especially after the 12-point agreement reached in New Delhi between the Sevel Party Alliance (SPA) and then rebel Maoists.

Even now, the escalating political tensions between the major political forces and the agitating Madhesi parties and the unofficial trade embargo imposed by India following the promulgation of the new Constitution in Nepal also drew huge attention of the United Nations.

The officials involved in the closed-door parleys between Mr. Feltman and the top political leadership analyze that the UN is seeking its intermediary role in ending the prevailing Madhes unrest which has continued for the past four and half months.

“The United Nations would be ready extending all kinds of support to Nepal government if any formal requests are made in near future,” the UN official spoke, according to sources, while meeting with President Bidya Bhandari and Prime Minister KP Sharma Oli. The UN political chief’s statement came at a time when the ruling and Madhesi parties were holding intense negotiations to end the Madhes unrest.

Despite UN’s reluctance, the UN political mission was shut down in January 2011. Neighbouring India was also a factor which encouraged then Madhav Kumar Nepal-led government to farewell the UN’s one of the largest political missions abroad.

India was not happy with the UN’s quite visible presence in its next door, mainly after the post-CPA political course, for which New Delhi had played a crucial role through the 12-point agreement. His visit happened at a time when the ruling parties and the Madhesi forces appear close to a deal.

Over the years, whenever political turmoil is high in Nepal, the UN issues frequent statements and when the situation calms down, it dispatches top bureaucrats with a particular message. Because, it’s evident that the UN doesn’t ignore its credit in Nepal’s peace process, for which it has also made a considerable contribution.

During his parleys with Nepalese government and political leaderships— both the ruling and agitating Madhesi fronts— the UN official underscored a clear message. “Find out a solution through peaceful means.”

He urged all sides to exhibit flexibility and redouble efforts towards an early resolution. He conveyed the global body understands that a political solution can be achieved on the basis of the government-proposed 3-point roadmap. Now, both the United Nations and New Delhi seem on the same page that issues raised by the Madhesi forces can be resolved through the government floated proposal.

He also urged the United Democratic Madhesi Front (UDMF) leaders for not to move away from the dialogue and drew up the UN’s deep concern on the severe humanitarian crisis in Nepal due to their border protests.

Similarly, the UN official also underlined Nepal’s rights to free transit via India in line with the statement by UNSG Ban Ki-Moon in November last year. The UN representative’s visit to Nepal has come also at a time when India’s unofficial trade embargo has entered into the fourth month in Nepal. The crippling trade embargo imposed has created a serious humanitarian crisis in Nepal due to acute shortage of fuel, medicines and essential goods in the Capital and across the country. While, the relief operations for April 25 earthquake victims in the hilly areas have been adversely affected due to scarcity of fuel with India’s unofficial trade embargo on Nepal.

Moreover, his message to the government was that bring the Madhesis on board while addressing their concerns through the Constitution amendment. And, he conveyed the Madhesis that their form of protest through border blockade is not a peaceful one but try to find out the solution through the peaceful negotiations.

According to the UN press release, Feltman ‎underscored the importance of rebuilding trust amongst different groups, including through agreement on the modalities of the process to delineate internal borders.

Feltman  expressed United Nations’ appreciation for Nepal’s unwavering commitment and contribution to the work of the United Nations in its 60 years of membership, citing in particular Nepal’s role in UN Peacekeeping operations and in representing the concerns of land-locked developing countries.

Feltman assured Nepal of the UN’s unwavering partnership in ‎its recovery following the devastating earthquakes of 2015 as well as in addressing broader humanitarian and development needs.

“Mr Feltman expressed the sincere hope and conviction that an understanding on these immediate matters will‎ allow Nepalis to meet their aspirations of economic development, accountability and the full implementation of constitutional provisions. The UN fully supports this Nepali process,” the press release said.