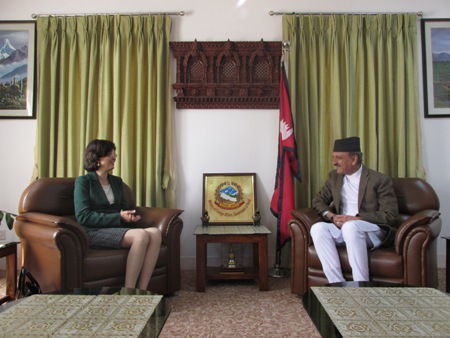 KATHMANDU, Nov. 18 (Xinhua) — The Nepalese government is keen to see a high level visit from China at the earliest to further strengthen the bilateral relations between the two countries, Minister for Foreign Affairs Dr. Prakash Sharan Mahat said here in Kathmandu, on Friday.

The foreign minister made such remarks during a meeting with newly appointed Chinese Ambassador to Nepal Yu Hong at his office, the Ministry of Foreign Affairs stated in a press statement.

“The minister conveyed the ambassador that the government is keen to welcome Chinese President Xi Jinping in Kathmandu at the earliest date,” the ministry said.

The foreign minister reiterated Nepal’s adherence to the long standing one-China policy, according to the ministry.

On the occasion, the two sides discussed about the implementation of various bilateral agreements reached between Nepal and China.

The two governments reached as many as 10 bilateral accords on connectivity, trade and commerce including the Transit Transport Agreement during Nepalese former prime minister K.P Sharma Oli’s visit to Beijing in March this year.

The deputy prime minister, who is also in charge of finance, thanked the ambassador for China’s incessant support to Nepal, according to a statement issued by the Ministry of Finance.

The Chinese ambassador told the minister that China is always ready to strengthen relationship with Nepal as a friendly neighbor and continue to support the country in the development process, the ministry said.

Mrs. Yu arrived in Kathmandu to take up her new diplomatic assignment as the Chinese ambassador to Nepal on Nov. 7, replacing Wu Chuntai.

The ambassador recently paid separate calls on Prime Minister Pushpa Kamal Dahal and senior leaders of ruling and opposition parties, during which she had reiterated China’s incessant support to Nepal.