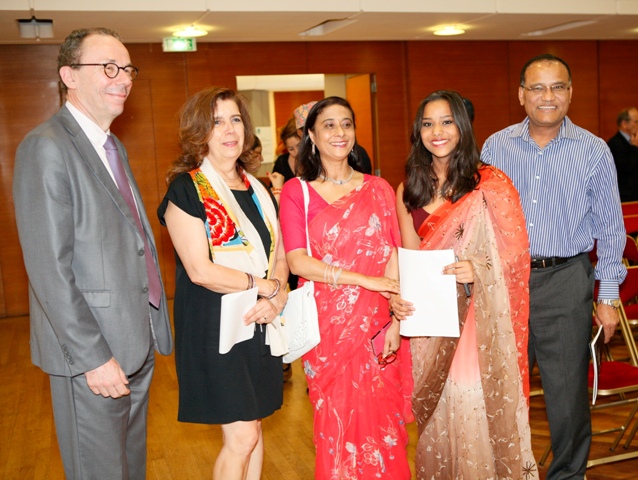 Nepal Foreign Affairs (Kathmandu, August 6) : With a view to promoting development diplomacy of Nepal and garnering support to the efforts being undertaken by the Government of Nepal for reconstruction and rehabilitation, the Nepal Embassy in Paris, France organized a Nepal support day program on 7 July in cooperation with the 17th Mairie of Paris.

During the program, a conference was organized with the participation of a large number of French Associations working on Nepal. Ambika Devi Luintel, Ambassador of Nepal to France welcomed the participants and sought their valuable suggestions on the presentations made by three panellists on four themes.

Joel Smadja, Geographer, Director of Research Centre for Himalayan Studies, CNRS made her presentation on Post-earthquake reconstruction in Nepal, giving an example of infrastructure development in the far remote region and Nuwakot. Emeritus Professor Gerard Toffin of CNRS spoke on the Role of French Associations working on Nepal in Culture, Social and humanitarian fields and gave details of the past work carried out in the Panauti town.

Geraldin Lemble-Pavlov, Director in the MEDEF International spoke on the theme Business and Investment Opportunities and shared her experience of work done in Haiti after natural disaster some years ago.  Lionel Habasque, Director-General of Voyageurs du Monde and Tour Aventure spoke on the theme Nepal-a Destination of French tourists  and underlined that in view of the earthquakes the number of tourists to visit Nepal have decreased in recent months and thus necessary measures are to be taken at the earliest possible.  The Embassy of Nepal provided information on tourism in Nepal.

Following the Conference, the cultural program was held in the evening. National anthem of Nepal was played. Faces of Nepal were presented with dresses of Newar, Gurung and Tharu communities and Nepali dress. Luintel, Ambassador of Nepal and Mme. Brigitte Kuster, Mayor of 17th Mairie of Paris jointly inaugurated the program by lighting the traditional lamp. The Ambassador of Nepal welcomed the participants in the cultural performances and highlighted that the program of this type would further strengthen relations between our two friendly countries. She invited French tourists to continue their visit to Nepal in coming days. She also called upon business community and entrepreneurs to look into the opportunities for their business and investment in Nepal.

Madam Mayor expressed her sympathies and solidarity with victims of the earthquakes in Nepal and said that her Mairie was pleased to extend support for reconstruction work. She mentioned that Nepal is known as a country of Lord Buddha.

Romaric Roignan, Director, representing the Ministry of Foreign Affairs and International Development highlighted that Nepal and France enjoy excellent relations and expressed thanks to the Government of Nepal for its cooperation to repatriate French nationals in the crisis of the earthquake. He also mentioned that the French Government was quick to respond by sending humanitarian and relief material and personnel after the earthquake.

Glimpses of Nepal were presented with photos of before and after the earthquakes. Newari, Gurung and Jhyaure dances were performed. Professor Mohan Ranganathan  and his son Ravi played classic music (cello). A documentary on tourist attractions in Nepal was shown to the audience. Dhakal, DCM delivered vote of thanks. The participants greatly enjoyed Nepali food items presented and requested to organize the program of this type in future as well. Aasika Luintel acted as Master of Ceremony.

Ambassador of Nepal visited Annecy and Chamonix in the Haut Savoie Region on 9 and 10 July. During her visit she met with Mme. Brasier Mirelle, Deputy Mayor of Annecy and discussed different subject matters, including promotion of tourism and business in Nepal.

Mayor Eric Fournier received the Ambassador upon her arrival at the town hall of Chamonix and organized a reception in her honour on 10th July. More than 50 persons representing various organizations working for Nepal and some Nepalese residing in the area and officials of the Municipality were present on the occasion.

He highlighted that special bond of relations exists between the people of Nepal and Chamonix. The Mayor informed her that the people of Chamonix were very much touched by the devastating earthquake in Nepal and therefore mobilized their resources to help victims of the earthquake.

The Ambassador thanked the Mayor for the solidarity and support extended by the people of the city of Chamonix to Nepal and requested for their continued cooperation. The Ambassador and the Mayor also discussed the matters on further strengthening cooperation in the near future.

Ambika Devi Luintel, non-resident Ambassador of Nepal to Spain presented copy of her Credentials to the Ministry of Foreign Affairs of Spain on 15 July in Madrid. Formal presentation of the Letters of Credence to His Majesty the King of Spain will be organized sometime in September 2015.

During her visit, she met with the Director-General of UN Division of the Ministry and conveyed sincere gratitude of the Government of Nepal for the solidarity and support of the people and Government of Spain to Nepal after the earthquake. During the meeting, matters of mutual interest were discussed. She also met with the Director-General of Asia Pacific Division of the Ministry. They discussed various matters, including bilateral visit, economic cooperation and Nepalese living in Spain. She also requested the Director-General to post a positive travel advisory that Nepal is safe for travel.

Ambassador Luintel met with Nepalese community at a special program organized by the Non-Resident Nepali Association (NRNA) in Barcelona on 17 July. During her meeting, she informed the Nepali community that the Government of Nepal has provided an opportunity to Nepali citizens to provide their suggestions on the draft of Nepal’s new constitution.

Therefore, she requested them to send their suggestions by e-mail to the Embassy before 21st July 2015. The representatives of NRNA-NCC Spain and other Nepalese organizations drew her attention to a need for opening a Nepalese Embassy in Spain and consular service problem faced by them.

The Ambassador also met members of Nepalese community in Madrid and discussed with them different subject matters including tourism promotion, business promotion and consular service.