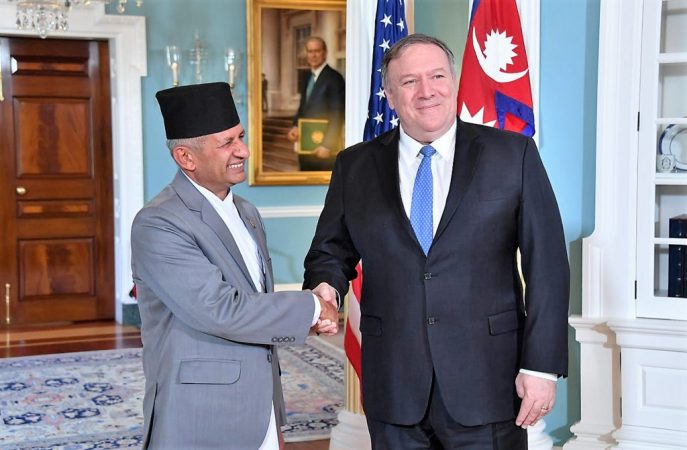 Talking to RSS after the meeting, Minister for Foreign Affairs Gyawali said, “We made shared commitment to widen the Nepal-US relations in a way to enhance mutual benefits”.
Minister Gyawali further said the Nepal government is opting for advancing its campaign ‘Happy Nepali, Prosperous Nepal’ through trade, investment and cooperation and the US was positive to support Nepal to that end.

“The political meeting has gained further momentum”, he said. In a meeting with the US government high-level officials, Gyawali informed that Nepal was successful in laying foundation for stable government by holding elections for all three tiers.

While briefing Nepal’s priorities, he told his US counterpart Pompeo that, “We have set a target to graduate to a middle-income country before the year 2030”.

Matters related to collaboration between the two countries on trade, investment and development cooperation were also discussed during the meeting.

Likewise, the foreign ministers of both the countries also dwelt on implementation of ‘Millennium Challenge Cooperation’ and its results.

In the meeting, matters related to regional and international agendas and implementation of bilateral agreements, Nepal’s peace process and MCC.