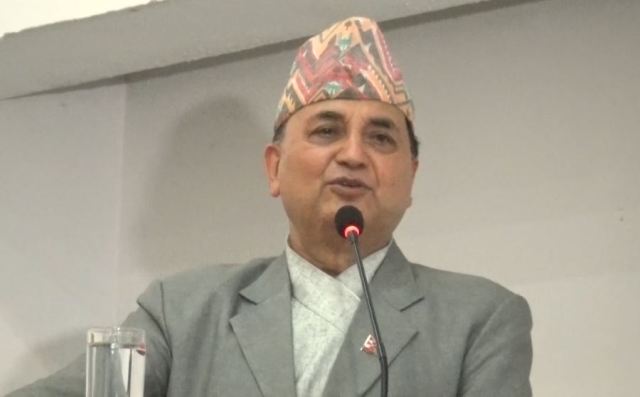 At a press meet organized by Nepal Press Organization here today, DPM Pokharel said that the Millennium Challenge Corporation (MCC) pact to be given by USA to Nepal was in parliament and it would be decided analyzing every angle so that there would be no compromise on national interest and policy.

The pact was brought in Nepal in advancing the infrastructure development and extension of power transmission during the time of the erstwhile government, Pokharel said.

DPM Pokharel, also chair of Nepal Trust, said that the property belonging to the Trust would be utilized following the laws for the maximum benefit of Nepalis.

On another note, DPM Pokharel said that the border disputes with India would be resolved through diplomatic channel and no single inch of the land could be compromised.

To a query of a journalist on election of new speaker at the House of the Representatives (HoR), DPM Pokharel said that the agenda would be decided before January 12.

Responding another query on recent development in the West Asia Region, DPM and Defence Minister Pokharel said Army Headquarters was in a regular contact with UN and concerned agencies to take stock of Nepali migrant workers and peace keeping troops in the region. He said Nepal was in high alert in this connection.