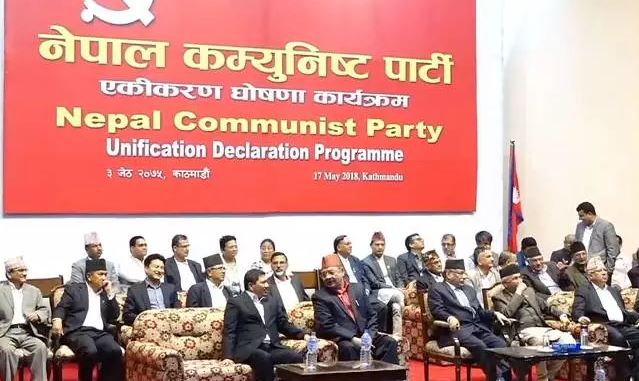 KATHMANDU, May 17 (Xinhua) – After a series of meetings and months-long negotiations, Nepal’s two major left-wing parties declared their unification and launched the new communist party on Thursday.

CPN-UML Chairman K.P. Sharma Oli and Maoist Centre Chairman Pushpa Kamal Dahal signed the agreement and declared the merger and formation of a single communist party in the Himalayan country.

The new party has been registered at the Election Commission after the CPN-UML and the CPN Maoist Centre dissolved their respective central committees.

The latest political development came after the seven-point party unification deal which was formally signed by the top leaders of both parties in Feb. 20.

Addressing the event, the new party leaders said the registration of the newly formed party will create helpful environment to fulfill the aspiration of people for sustainable peace and country’s development.

“It’s a historical day for Nepal; it has entered to a new era of prosperity. The party unification will help Nepal in upgrading from the least developed country and will help to achieve sustainable development goals and poverty alleviation, among others,” Prime Minister Oli said.

As per the terms of agreement of the unification of the two parties, Oli and Dahal will lead the unified party and a nine-member secretariat and enjoy equal power.

“A new era of prosperity and good governance has started in the country. The major motive of this unification is to lead the country towards socialism and economic prosperity with social justice,” said Dahal.

As per the agreement, there will be 43 standing committee members in the new party which includes 25 from CPN-UML and 18 from CPN Maoist Centre.

The unified party will have 441 members in its central committee, out of which CPN-UML would have 241 members and CPN Maoist Centre would have 200 members.

After the merger, the CPN-UML-led government will enjoy two-thirds majority in the parliament.