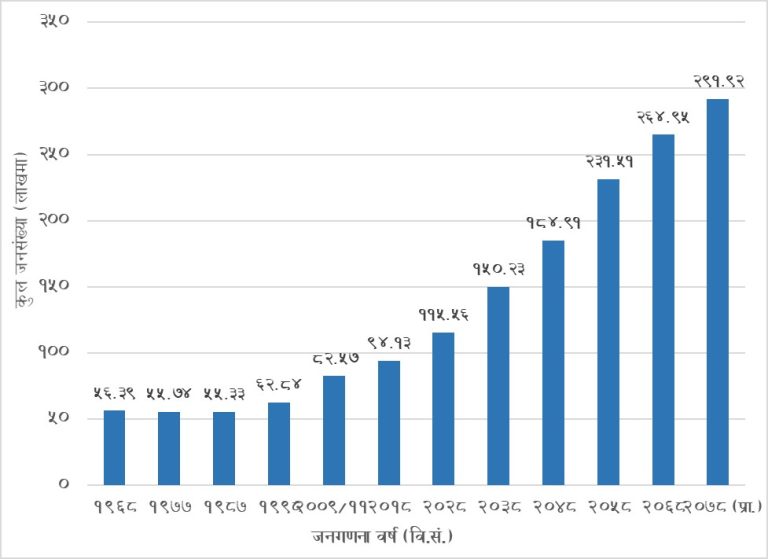 According to the data made public by the Bureau on Wednesday, the population of Nepal has reached 29.91 million of which is 1,49,1,169 are females and 1,42,91,311 males. According to the previous census, Nepal’s population was 26.4 million.

The average annual population growth rate in the last decade is 0.93% and it was 1.35% in the previous census. The first phase field work of the 2021 Census was carried out from September 15 to October 4 and the second phase field work was done from November 11 to 17, 2021. One thousand eight hundred and seventy one employees were mobilized for managerial work of the National Population Census 2021 at the province and district level while around 8,500 supervisors and 39 thousand enumerators were engaged in the field work.

The forms (house and household listing form, main questionnaire and community questionnaire) filled with the conclusion of the two-phase field work were collected at the CBS and the data processing was begun. Number of increased families As per the preliminary results, the number of families normally residing in Nepal is 6 million 761 thousand 59 and they are found living in a total 5 million 643 thousand 945 houses. According to this, 12 families on an average are found living in 10 houses.

On a province-wise basis, the average number of family members is the lowest in Gandaki province (3.36 persons per family) and the highest in the Madhes province (5.66 persons per family). This was 4.16 and 5.80 persons per family respectively as per the 2011 Census. District-wise, Dolakha district has the lowest size family (3.41 persons) and Rautahat has the largest size family of 5.92 persons. Population increases in Tarai According to the geographical region, the distribution of total population of the portion of the Tarai region has been found increased in 2021 as compared to the 2011.