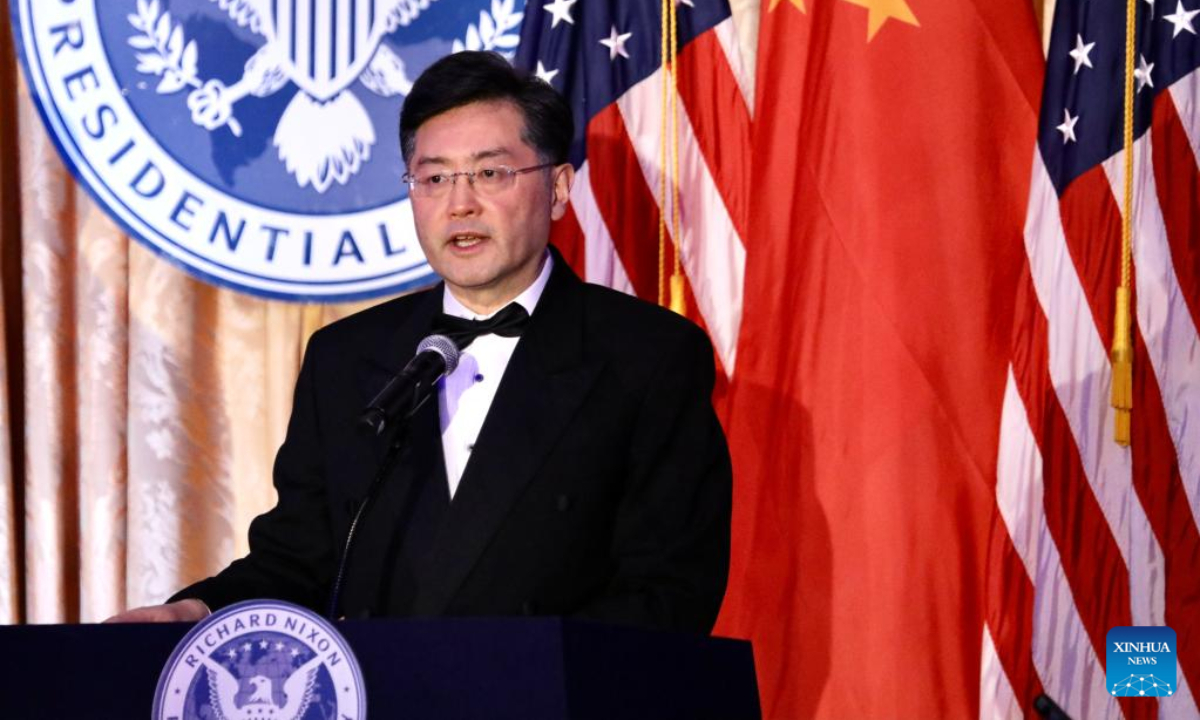 Chinese Foreign Minister Qin Gang spoke with US Secretary of State Antony Blinken over the phone on Sunday, saying goodbye to Blinken and recalling his multiple candid, in-depth and constructive meetings with the US official. The Chinese diplomat said he is looking forward to keeping in working contact with Blinken and helping the China-US relationship improve, the Chinese Foreign Ministry said on Monday.

Qin, incumbent Chinese Ambassador to the US, was appointed as the new Chinese Foreign Minister, according to a decision made by the 13th National People’s Congress Standing Committee on Friday. Wang Yi, China’s former foreign minister, was appointed as director of the Office of the Foreign Affairs Commission of the Communist Party of China Central Committee.

“Called Blinken to say goodbye. I appreciated several candid, in-depth and constructive meetings with him during my tenure. I look forward to continuing close working relations with him for a better China-US relationship,” Qin tweeted.

Spoke by phone this morning with incoming People’s Republic of China Foreign Minister Qin Gang as he departs Washington for his new role. We discussed US-PRC relationship and maintaining open lines of communication, Blinken tweeted.

Some Chinese experts on China-US relations hold a cautiously optimistic view on the state of ties – one of the most important relations between major powers – in 2023, particularly after the past year of 2022 has seen some significant ups and downs in bilateral ties, mainly because of Washington’s wrong understanding and misjudgments of China.

Although the friction between the two countries has cooled with efforts mainly made by China, some problems in China-US relations have not been solved and could deteriorate at any time, experts warned. Although the US is talking about “setting guardrails” for bilateral ties, its actual actions have always provoked bilateral relations, making people doubt its sincerity, they noted.

“I believe that in 2023, China-US relations could be steadily managed and further develop on the basis of the consensus reached by the top leaders of the two countries,” Diao Daming, an expert on US studies and associate professor at the Renmin University of China in Beijing, told the Global Times on Monday.

The two sides will further clarify the directions that will prevent bilateral relations from “derailing” or “getting out of control,” finding the correct way for major powers to coexist while exploring new strategic guidelines and enhancing communication at various levels, the expert said.

In 2022, Chinese President Xi Jinping and US President Joe Biden met three times from online to in-person. The latest face-to-face meeting in Bali, Indonesia in November conveyed a great significance and set the tone for future bilateral relations.

In fact, from the Bali meeting between the leaders of the two countries, both sides evaluated that each other’s policies needed to change. There is an objective result that both sides now think there is a chance to stabilize China-US relations, Da Wei, director of Center for International Security and Strategy at Tsinghua University, told the Global Times on Monday.

A senior delegation from Washington including US Assistant Secretary of State for East Asian and Pacific Affairs Daniel Kritenbrink, and Laura Rosenberger, senior director for China affairs of the White House National Security Council visited the city of Langfang in North China’s Hebei Province in early December, a visit also preparing for Blinken’s planned early 2023 trip to China.

“With the adjustment and optimization of epidemic measures, the two sides will see enhanced high-level official and non-official communication this year, especially the resumption of trade and business as well as people exchanges,” Diao said.

Still, Chinese experts warned of “possible bombshells” in the US-China relationship, especially on the Taiwan question.

“Given that the Biden administration is facing a more divided government with Republicans set to take control of the House, there will be a tougher tone inside the House of Representatives toward China, including more provocative words and deeds on the Taiwan question,” Li Haidong, a professor at the Institute of International Relations at the China Foreign Affairs University, told the Global Times on Monday.

The Taiwan question remains a vulnerable aspect of the China-US relations with some experts believing that the biggest bombshell could be a potential visit to Taiwan by potential US House Speaker Kevin McCarthy.

“There’s no need for us to be too optimistic or too pessimistic over China-US relations in 2023, as the common interests of the two countries are deeply interconnected, but the rivalry plus confrontation will still be the mainstream tone in the US Congress, leading to some new ups and downs,” Li said.