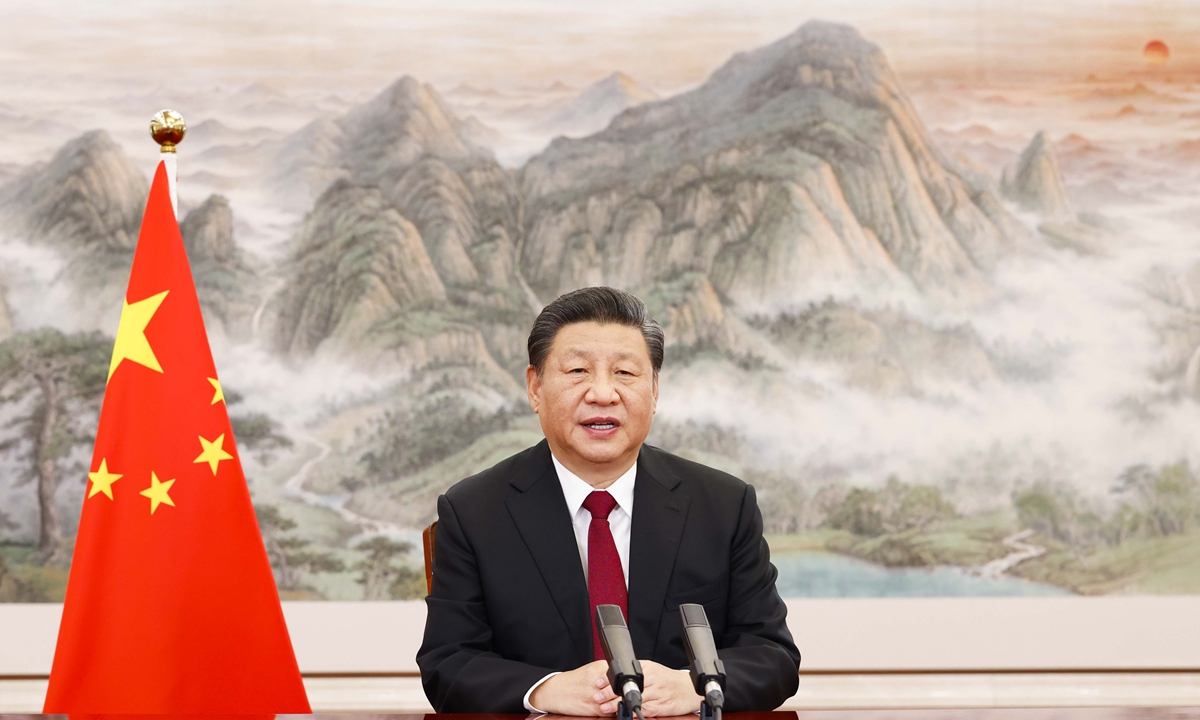 Global Times (18 January 2022) – Chinese President Xi Jinping on Monday delivered his first major speech of the new year at a global event at the World Economic Forum (WEF), where he issued stern warnings against acts of containment, confrontation and suppression as well as practices of hegemony and bullying, while calling on global efforts to seek peaceful coexistence and win-win results.

In a special address to the WEF’s 2022 Davos Agenda virtual event, Xi also urged concerted efforts to defeat the pandemic and promote steady recovery of the world economy, as the world continues to face a still raging COVID-19 pandemic. He called for the equitable distribution of vaccines, faster vaccination, as well as a continuation of economic globalization, stressing protectionism and unilateralism can “protect no one.”

Buoyed by a flurry of Xi’s quotes that have quickly gone viral on social media and which have been cited as effective doses against unilateralism, decoupling and ideological antagonism, international affairs observers admonished those who went against this trend as “countercurrents.”

The president’s illuminating remarks came as the Chinese economy recorded an 8.1 percent expansion for the whole of 2021, one of the fastest growing across the globe, underpinning hope for the world economy to emerge from the woods.

Reckoning China as the only economy with the policy leeway that allows it to deviate from a US-pioneered monetary policy tightening this year, economists maintain an optimistic outlook for China to remain a safe haven for global capital.

As a tower of strength that has effectively contained the coronavirus epidemic domestically as well as extended a helping hand for the global pandemic response, China is shown to be living up to its responsibility as a major global power, experts said, hailing Monday’s remarks as breathing new life into an imperative push for faster but more fairly distributed inoculations worldwide.

“Facts have shown once again that amidst the raging torrents of a global crisis, countries are not riding separately in some 190 small boats, but rather are all in a giant ship on which our shared destiny hinges. Small boats may not survive a storm, but a giant ship is strong enough to brave a storm,” Xi said in his speech, vividly articulating a globalized agenda for closing the global immunization gap.

“Holding each other back or shifting blame will only cause needless delay in the response and distract us from the overall objective,” Xi commented, calling for vaccines to be fully leveraged as a powerful weapon, and for their equitable distribution and faster vaccination to be ensured.

China has apparently moved toward this goal and delivered on its promises.

Acts of single-mindedly building “exclusive yards with high walls” or “parallel systems”, of enthusiastically putting together exclusive small circles or blocs that polarize the world, of overstretching the concept of national security to hold back economic and technological advances of other countries, and of fanning ideological antagonism and politicizing or weaponizing economic, scientific and technological issues, will gravely undercut international efforts to tackle common challenges, Xi said in his speech.

Li Haidong, a professor at the Institute of International Relations of the China Foreign Affairs University, told the Global Times on Monday that “it’s clear, Xi is criticizing the acts carried out by the US and a few of its loyal followers in recent years.”

“What the US has done or ordered its followers to do to contain China’s economic and technological development has already harmed the process of global economic integration and the world’s joint advance in the field of science and technology,” Li said, noting that US moves will definitely bring more crisis, divergences and confrontations, and will contain the process of globalization.

“Driving forces bolster the river’s momentum, and resistance may yet enhance its flow. Despite the countercurrents and dangerous shoals along the way, economic globalization has never and will not veer off course,” he said.

“Countries around the world should uphold true multilateralism,” Xi said. “We should remove barriers, not erect walls. We should open up, not close off. We should seek integration, not decoupling. This is the way to build an open world economy.”

Li said China’s aspiration is clear and positive, as it’s based on the idea of realizing joint development, “but will the US and its loyal followers understand this idea? Will they realize they are not just containing China, but actually acting like ‘countercurrents’ to resist the trend of historical development? We hope they can realize their mistakes and correct them as soon as possible even if prospects for such a possibility are not very optimistic.”

The multilateralism- and rationalism-oriented special address also turned out to be a source of optimism for not only the Chinese economy, but the world economy as a whole, according to economists, describing putting the economy on track for an independent monetary policy trajectory as a ballast for a global economic boat currently in rocky waters.

“Shifts in the domestic and international economic environment have brought tremendous pressure, but the fundamentals of the Chinese economy, characterized by strong resilience, enormous potential and long-term sustainability, remain unchanged,” Xi said in his speech, noting that “we have every confidence in the future of China’s economy.”

China’s GDP totaled 114.4 trillion yuan, or $17.7 trillion, based on preliminary estimation revealed Monday as part of a slew of indicators gauging the economic performance over the past year.

That suggests that China’s GDP topped the 100 trillion yuan mark for the second year in a row, and an 8.1 percent full-year growth put the economy among the world’s fastest growing, economists at Bank of Communications wrote in a note sent to the Global Times on Monday.

China’s economic size as a percentage of the world’s total is expected to rise above 18 percent, bearing witness to the economy’s strong vitality and resilience, they stressed.

Moreover, the country’s effective virus containment drive has facilitated a massive increase in both exports and imports and prompted its commodity trade to hit a new high in 2021, paving the way for the country to become the world’s biggest exporter for the eighth consecutive year, the economists continued.

Looking ahead, the Chinese economy is expected to set itself apart from the US-led move to hike interest rates, which tends to sow the seeds of instability and turbulence, especially for developing economies with inadequate foreign reserves, analysts said.

The US Federal Reserve is widely expected to raise interest rates three to five times this year, beginning in March, according to Tian Yun, a Beijing-based economist.

That means the US monetary policy is set to tighten, driving capital flows into the US while auguring ill for the economies that have inadequate foreign reserves but have been flooded with speculative capital since the virus fueled pro-growth funding, Zhang Yansheng, chief research fellow at the China Center for International Economic Exchanges, told the Global Times on Monday.

“If major economies slam on the brakes or make a U-turn in their monetary policies, there will be serious negative spillovers. They will present challenges to global economic and financial stability, and developing countries would bear the brunt of it,” Xi emphasized in his address, shining the spotlight on the uncertainty over economic recovery.

Concerns over the fallout of rate hikes, as analysts pointed out, actually underlined China’s capacity to help stabilize global growth, with its monetary policy independence hedging the world economy against rocky waves in the wake of a drastic U-turn in monetary policy terms.

“China has refrained from a flood irrigation stimulus and its leverage ratio is not high,” enabling the economy to deviate from a cycle of interest rate hikes prevailing among Western countries, Zhang said.

It could be said that China is the one and only economy that’s capable of easing its monetary policy this year, Tian told the Global Times on Monday, citing the country’s unparalleled achievements in containing the pandemic and its irreplaceable role in filling global supply chain gaps.

The fast-spreading Omicron variant actually reminds the global economy of what could be a prolonged pandemic, thereby dampening hopes for global supply chain recovery in the near future, Tian said.

With the Chinese economy on track for a mild monetary easing, ensuring a stable economic recovery this year, there is little chance of capital flight in the wake of Fed rate hikes, but instead China is likely to remain a safe haven for global capital, as it has been over the past few years, Tian said.