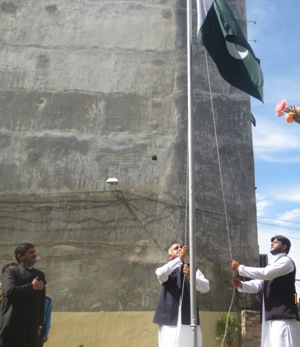 Pakistan Ambassador Arshad Saud Khosa hoisted the national flag. Officers of the Embassy, officials along with their families and Pakistani Community in Kathmandu attended the ceremony.

On the occasion special massages of Pakistani President and Prime Minister were also read out. President of Islamic Republic of Pakistan Mamnoon Hussain said “Pakistan Army and other law enforcement agencies are performing their responsibilities in an effective manner, bringing peace in the country. Similarly, on the economic front, the government has adopted solid policies for the economic turnaround. The business activities are getting a spur, generating investment opportunities for the investors especially the foreign investors who are rushing to invest in Pakistan. These changes bode well for our economic future.”

The president has said that country is achieving economic progress in the recent years. “With the Chinese assistance, work on the economic corridor has already been started. This project will lead to economic revival in the country. On the political front, the indicators are positive as the political forces are evolving consensus for the achievement of national objectives. Such indicators are vivid proof of political maturity in the country which also indicates the beginning of a new and glorious era in Pakistan,” he said.

In his message to the people, Prime Minister of Pakistan Nawaz Sharif said “The concept of people’s rule, supremacy of Constitution and enforcement of democracy in Pakistan has strengthened. We, have to take course of economic development, which shall take Pakistan to the brightened destinations of progress and prosperity so that the whole nation gets benefits from these accomplishments.”