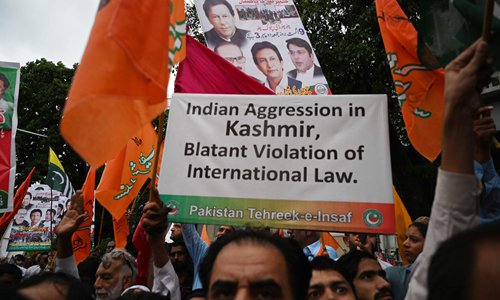 By Long Xingchun (Global Times, 20 August 2019) – Pakistan is prepared to “fight to the end” over the Kashmir issue if necessary, Prime Minister Imran Khan said on Wednesday during a speech from Pakistan-controlled Kashmir.

“I don’t want war but it’s clear now that they [India] don’t want to talk,” Khan said. Pakistan’s 73rd Independence Day was celebrated on Wednesday as “Kashmir Solidarity Day,” so as to express support for the people of Kashmir.

On Thursday, cross-border skirmishes between Pakistan and India broke out, killing at least three Pakistani and five Indian soldiers, according to reports. Such skirmishes are unavoidable, but Pakistan would not launch a large-scale war. Thus, Pakistan’s current moves are all political and diplomatic. Military measure is not an option.

Pakistan wants to own the whole Kashmir, but it is hard to realize the ambition. Consequently, Pakistan is taking an intransigent attitude in words and politics, but the country is still restrained in action. Khan needs to say strong words to pacify the Pakistani people.

The revocation of the special autonomous status of India-controlled Kashmir has been a long-term strategic purpose of the Bharatiya Janata Party (BJP) led by Indian Prime Minister Narendra Modi. During the 2019 India general elections, the BJP had already pledged to scrap Kashmir’s special status. The Modi administration’s move won wide support in the BJP and in the whole Indian society. Even in the Indian National Congress, India’s main opposition party, many people support Modi’s move. Now that the Modi administration has carried out its promise, it is unlikely that India will revoke the decision.

India’s move was only aimed at the India-controlled Kashmir and did not cross the Line of Control (LoC). However, as the Kashmir disputes are yet to be resolved, India’s unilateral move is irresponsible and may further escalate disputes between India and Pakistan. Besides, residents in Kashmir are mostly Muslims. After India’s decision takes effect, many Hindus may enter Kashmir, which may trigger opposition from local Muslims and ignite long-term violent conflicts in the region. It may also lead to opposition from other Islamic countries.

As for China-India relations, India’s move will neither change the LoC on China-India border, nor affect China or China’s sovereignty. China’s attitude toward the Kashmir issue is generally neutral. China does not want to see an armed conflict between India and Pakistan, and we hope that the two countries can resolve their disputes peacefully. India is always against any third-party mediation in this regard. In the end, only India and Pakistan can eventually resolve Kashmir disputes.

The author is director of the Center for Indian Studies at China West Normal University and research fellow at the Charhar Institute. [email protected]