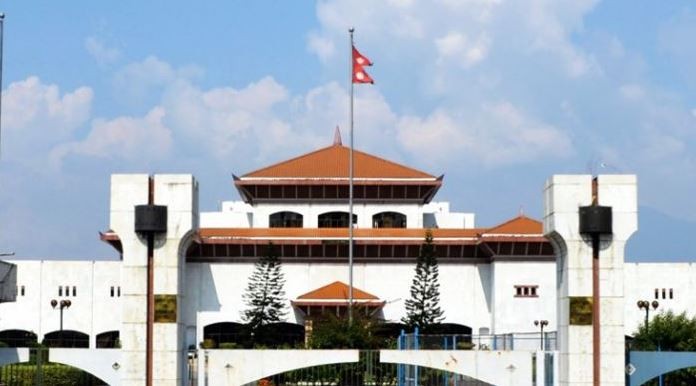 Speaking in the special hour of the National Assembly here today, they suggested the government to take the issue into serious consideration although they hailed the move of government ‘sending the diplomatic note’ to the Indian side using the diplomatic channel was a positive one.

The parliamentarians were voicing for the government to be more assertive and take a firm stance against the issuance of India’s new political map which includes Nepal’s territories such as Kalapani, Lipulek, Limpiyadhura inside its territory. These areas, unquestionably, belong to Nepal, the parliamentarians univocally said.

NCP’s Khimlal Bhattarai urged the government to seek resolution to this issue with India through diplomatic means. He demanded that the government should clearly clarify about the dispute surrounding lands in Gokarna and Nepal Trust’s land at Durbarmarga in Kathmandu.

“The whole Nepalis stand united against the Nepal-India border issue. The other political parties have also shown a high-level of reciprocation and reaction towards this issue,” said Bhattarai, congratulating,”I would like to extend my thankfulness to the government of Nepal for resorting to political and diplomatic channels for taking a firm stance that Kalapani, Lipulek, Limpiyadhura areas belong to Nepal.”

According to him, Nepal successfully organizing the 13th South Asian Games (SAG) had given a new message to the international sports community and had enhanced the image of the country.

Similarly, NC’s Badri Prasad Pandey urged the government to form a high-level dialogue team to hold the talks with the Indian side on the border issue with India.

Stating that India had encroached Nepal’s land by issuing a new political map including Nepal’s areas in its territory, Pandey demanded that the government should keep the parliamentarians in the loop in regard to resolution of border dispute.

Chakra Prasad Snehi said that the India was unnecessarily vexing the Nepalis in the no man’s land on various pretexts due to the porous border shared by both Nepal and India. He fumed, “India has encroached the Nepali land although the Sunauli Sandhi clearly states that Nepal-India’s border is Kali River.”

He highlighted the need for the government to make efforts at diplomatic level with evidences.

He also demanded that the government should appraise the parliamentarians about the initiatives, subsequent actions and reactions in regard to the resolving border issues with India.

Bimala Rai Poudel urged the government to pay attention towards road safety in view of growing cases of road accidents in the country. She viewed that road safety was not only federal government’s responsibility, it was, according to her, equally a cause for concern for the provincial government and the local government.

Ram Lakhan Chamar expressed his qualm, stating that the National Dalit Commission had discriminated between Dalit communities. “The Commission had overlooked the Madheshi Dalits,” he ranted.