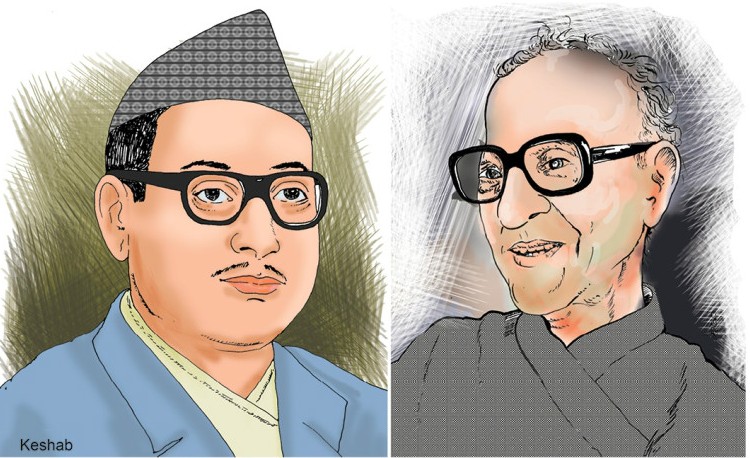 By Ritu Raj Subedi (KATHMANDU, 26 July 2019) – This week the nation commemorated two iconic figures of Nepal’s political movement – BP Koirala and Pushpa Lal Shrestha. Their memorial days were marked amidst a variety of functions, with their followers promising to follow the ideals of their founding fathers. BP was a founding leader of Nepali Congress (NC) that led successful democratic revolution in 1951, toppling the autocratic Regime. He fought against the autocratic Panchayat system throughout his life. He introduced the socialist agenda in his party and applied it during his 18-month-long premiership. Taking his cue from the Western political scientists, BP propounded the theory of nationality, democracy and socialism. The NC has continued to embrace these thoughts till now though it had adopted neo-liberal policy in 1990s while in power.

Root cause
Pushpa Lal was the founding general secretary of the Communist Party of Nepal. Along with four other revolutionary colleagues, he established CPN in Calcutta of India in 1949. He was the first top-notch Nepali Marxist who analysed the economic classes of Nepali society based on dialectical materialism. He translated The Communist Manifesto into Nepali and propagated Marxist thoughts throughout the country. He wrote the first manifesto of the CPN based on the ground reality and socio-economic conditions of Nepal. He was for abolishing the feudal Rana and monarchical system considered to the root cause of exploitation and economic disparity in the country. Before becoming a devout communist, he was involved in the Nepali Rastriya Congress but he became desperate with its policy and quit it. In it, he saw no concrete vision and policy to transform the nation in favour of working class and poor peasants.
BP and Pushpa Lal were fast allies in their fight against despotic Panchayat system. They represented opposite political ideologies but were on the same page when it comes to reinstating democracy and pushing sweeping economic reforms. According to Pushpa Lal’s close aide Kesharmani Pokharel, BP and Pushpa Lal had held several rounds of talks for carrying out a joint struggle in exile in Banaras of India. A fragment of their conversation goes like this:

BP Koirala: Pushpa Lal ji, put your signature on my political programme, I will do so on your economic programme.
Pushpa Lal: I have come here with a mandate of the party’s conference. I think we should move ahead jointly. The people’s movement should be launched. What is your political programme?

BP: The reinstatement of democracy.
Pushpa Lal: I have come with the same agenda. Why should we not jointly launch the movement since we have the same agenda?
BP: That’s right, there is some difficulty about moving ahead by making such a declaration. The international situation does not allow me to do so. You should create an atmosphere in mustering the support of the communist world for our movement. No nation is openly speaking in our support though they extend their moral support. Particularly, I would like you to play your role in winning the moral support of China.

Pushpa Lal: Ok. I will take it seriously.
BP: I will do as per your advice but let’s not make an announcement now. I will be attacked if I do so. Rather, let’s reconcile among our cadres across the districts, let’s stop criticising each other. Send the communist cadres visiting you to see me. I will send NC cadres to meet you. In the second phase, let’s hold joint meetings between communist and congress workers district after district. If that is not possible, let’s call them to India.
Pushpa Lal: I fully agree.

BP: But I have a request to you. Don’t stab on my back after launching the movement.
Pushpa Lal: No, there should not be crisis of confidence between us. You should not also deceive me; I won’t deceive you.
This conversation amply suggests cordial and friendly bonhomie between BP and Pushpa Lal. They were really serious about restoring democracy and putting the country on the path of development. This also debunks the misconception that BP was against the idea of forming an alliance between the communist and Congress to bring down the Panchayat system. The dream of the two great leaders came true when both the forces joined hands to topple the Panchayat in 1990.
BP’s party, NC, had been at the helm of power time and again following the 1990 political change. However, the NC-led government could not successfully handle the affairs of the state as it was marred by internal bickering. At the same time, it failed to deal with the rising left forces with a reconciliatory approach. This pushed the nation into vicious game of power politics, corruption scams and finally ruthless insurgency. The NC squandered the historic opportunity of nation-building task largely owing to its disregard for the core philosophy of BP – nationalism, democracy and socialism. Today the party is thrown into a mess. Let’s hope that the BP memorial day will inspire it to regain the democratic strength and catch the right path ahead.

Visionary thought
The ruling Communist Party of Nepal (CPN) stands to live up to the dream of late Pushpa Lal, who had envisioned building an equal, equitable, prosperous and peaceful society more than half a century ago. The county has now embarked on the republican path because of Pushpa Lal’s pragmatic and visionary political thought that calls for an alliance between the left and democratic forces to remove monarchy.
With almost two-thirds majority, the communist-led administration must not shy away from implementing Pushpa Lal’s ideas and policies. Its leaders and cadres should emulate his Spartan life style, sacrifice and unflinching commitment to the socialist values. Today communist leaders have become luxurious and are more inclined to be in the corridors of power than going to the grassroots to share the burden of the commoners. Current NC’s plight is a clear testimony to the fact that parties that fail to deliver on promises are severely punished in the next election. It is hoped that the CPN-led government takes a lesson from history and strains every sinew to bring prosperity and happiness to the people based on the guidance of late Pushpa Lal.

This article first appeared in The Rising Nepal.