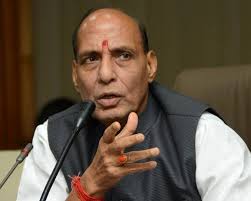 Agencies ( 13 December 2021) – As the government commemorates India’s victory over Pakistan in 1971 War, which led to the liberation of Bangladesh, Defence Minister Rajnath Singh Sunday said that the war was a reminder that India’s partition on religious lines was an “aitihasik galti” (historic mistake), and that Pakistan has ever since continued to engage in a proxy-war against India.

Speaking at the inauguration of Swarnim Vijay Parv at India Gate in the national capital, marking 50 years of India’s victory in the 1971 war as well as the Indo-Bangladesh friendship, Singh said that the war also demonstrated the importance of “jointness” among India’s armed forces, towards which the government was working now.

The 1971 war, Singh said, “tells us that the partition of India on the basis of religion was a historic mistake. Pakistan was born in the name of one religion but it could not remain one. After the defeat of 1971, our neighbouring country is constantly waging a proxy war in India.”

Pakistan, he said, “wants to break India by promoting terrorism and other anti-India activities. Indian forces foiled its plans in 1971 and now work is going on to eliminate roots of terrorism by our brave forces. We have won in the direct war, and will achieve victory in the proxy was as well.”

Singh said that in “today’s changing times, there are discussions of promoting jointness and integration between our three armed forces, I think the 1971 war is a great example of this. This war made us understand the importance of planning, training and fighting together.”

He hailed India’s victory in the 1971 war “that changed both the history and geography of South Asia”.

India has always stood on the side of truth and justice, said Singh, adding that the war “wasn’t only against Pakistani military, but against injustice and torture. It was not only India’s victory over Pakistan, but of justice over injustice, of virtue over vice.”

Quoting American civil rights leader Martin Luther King Jr, Singh said, “injustice anywhere is a threat to justice everywhere”. The injustice and atrocities on Bengalis by Pakistani forces “were a threat to the entire humanity in one form or the other” and in that scenario “to liberate the people of East Pakistan from that injustice and exploitation was our state religion, national religion and military religion”.

“This war is a classic example of our morals, our democratic traditions and just treatment. It will be rarely seen in history that after defeating another country in a war, India did not express its dominance over it, but handed over power to the political powers there,” the defence minister noted.

India has contributed to the establishment of democracy in Bangladesh, he said. “Today we are very happy that in the last 50 years Bangladesh has progressed rapidly on the path of development, which is an inspiration for the rest of the world.”

He reiterated that “India has never invaded any country, nor has it ever captured an inch of someone else’s land.”

“On this day, I bow to the bravery, valour and sacrifice of every soldier of the Indian Army, due to which India won the 1971 war. This country will always be indebted to the sacrifice of all those heroes,” he said.

On the occasion, Singh also remembered Chief of Defence Staff General Bipin Rawat, who, along with his wife and 11 other military personnel died in a helicopter crash on December 8. He said it was decided to keep this function simple after Rawat’s untimely death. “I pay my heartfelt tribute by remembering him,” he said, adding that in Rawat’s death, “the country has lost a brave soldier, an able advisor and a lively person. Today I am missing him very much.”

Regarding the only survivor of the crash, Singh said that he was in touch with Group Captain Vrun Singh’s father and wished him a quick recovery.

A pre-recorded message of Rawat was also shared, in which he congratulated all the soldiers of the Indian armed forces, on the 50th anniversary of the 1971 war, and paid tributes to those who had fought in it.