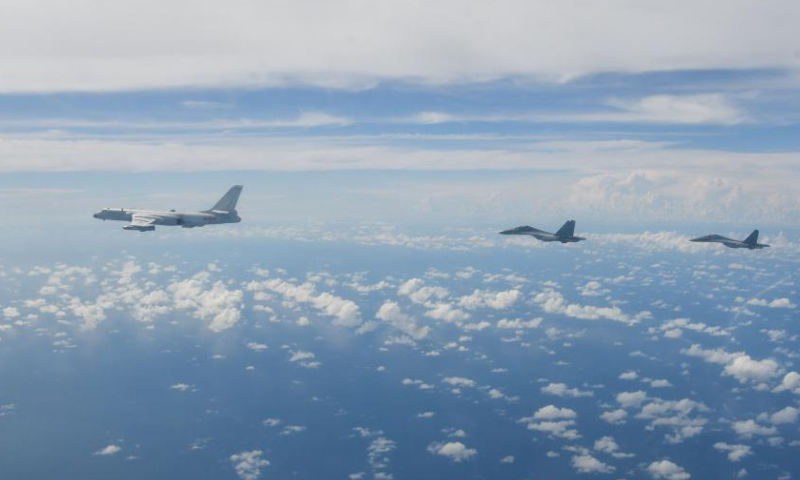 Global Times (8 August 2022) – The Chinese People’s Liberation Army (PLA) on Monday continued military exercises and training activities surrounding the island of Taiwan, marking an extension from the previously announced schedule. Drills like these will not stop and are expected to become routine until reunification, as the Chinese mainland shows its determination to push forward the reunification process after US House Speaker Nancy Pelosi’s provocative visit to the island last week that seriously violated China’s sovereignty and territorial integrity, experts said.

The drills not only lock the island from inside out, but also from the outside in, telling external forces that the PLA has powerful area denial capabilities in the region that even the US cannot rival, analysts said.

Possible external military interference forces like the US and Japan have more advanced submarines, particularly US’ nuclear-powered ones, so practicing anti-submarine warfare drills in the real underwater terrains around the Taiwan island is very significant, the expert said.

The drills displayed that the PLA can detect, locate and attack hostile submarines from multiple dimensions, and defend against their attacks, the expert said.

While the CCTV report did not confirm if a PLA submarine participated in the drills, Zhang Junshe, a senior research fellow at the Naval Research Academy of the PLA, told the Global Times that the PLA has sent an aircraft carrier group featuring at least one nuclear-powered submarine to the ongoing drills around the island of Taiwan for its first carrier deterrence exercise. The PLA also operates a number of conventional submarines.

Monday’s exercises mean that the PLA has extended its drills surrounding the island of Taiwan, which were originally scheduled to conclude on Sunday noon.

“As long as the Taiwan question is not solved, drills like these will not stop,” Song Zhongping, a Chinese mainland military expert and TV commentator, told the Global Times on Monday.

The PLA exercises could become a routine, Song said. The longer the island is blockaded, the more it shows about the mainland’s control over it, he said.

When asked about the PLA’s drills at a regular press conference on Monday, Wang Wenbin, a spokesperson at China’s Ministry of Foreign Affairs, said that the drills are transparent and professional.

With relevant authorities publishing related notices, the drills abide by domestic and international laws as well as international practices. and aim to warn those who provoked and safeguard national sovereignty and territorial integrity, Wang said.

The Maritime Safety Administration of East China’s Fujian Province published a notice on Wednesday setting up the restriction zones for the drills from Thursday to Sunday, but no such notice was released for Monday’s drills. If no new restriction zones are set for the additional drills, it is because they will not endanger normal civilian activities, so likely without live-fire shooting, experts said.

Military activities, including those by the US, also not always draw restriction zones if they have no impact on other vessels or aircraft, Song said.

When there is need, for example, to keep US warships from entering the Taiwan Straits, the PLA could always set new restriction zones, Song said.

The Pentagon has ordered the USS Ronald Reagan aircraft carrier to remain in waters near the Taiwan island, and the US will “conduct standard air and maritime transits through the Taiwan Strait[s] in the next few weeks,” US news outlet Business Insider quoted White House National Security Council spokesperson John Kirby as saying on Thursday.

The PLA’s drills are aimed to deter “Taiwan independence” secessionists and external interference forces, not to disturb daily lives of the ordinary people on the island, Song said.

Shortly after Pelosi landed in Taiwan island on August 2, the PLA Eastern Theater Command responded with joint military exercises surrounding the island starting the same day. Then the Xinhua News Agency announced that the PLA would conduct a series of live-fire military drills from Thursday noon to Sunday noon in six different areas that encircle the island from all directions.

The first phase of the drills, started in the evening of August 2, featured joint maritime and air exercises in sea and air space to the north, southwest and southeast of the island, with official reports showing J-20 stealth fighter jets taking off for the drills and launchers of rockets and missiles mobilizing under shades of the night.

On Wednesday, the PLA Eastern Theater Command organized its affiliated Navy, Air Force, Rocket Force, Strategic Support Force and Joint Logistic Support Force and conducted realistic combat-oriented joint exercises in the sea and air space to the north, southwest and southeast of the Taiwan island, with joint blockade, sea assault, land attack and air combat drills being at the core of the operation.

The second phase of the exercises started on Thursday with long-range artillery live-fire shooting drills in the Taiwan Straits by the Army, followed by fire assaults with multiple types of conventional missiles at several designated sea areas to the east of Taiwan island by the Rocket Force. More than 100 warplanes and more than 10 warships surrounded the island for blockade, reconnaissance and alert patrol missions.

Warships, warplanes and coast-based anti-ship missiles were deployed in Saturday’s drills to hone land attack and sea assault capabilities under systemic support, with Navy forces joining their counterparts from the Air Force, boosting the interoperability supported by a joint operational system.

On the last day of the originally scheduled drills on Sunday, bombers and fighter bombers launched a standoff, saturation strike exercises with various types of precision munitions, with the bombers flying across the Taiwan Straits from north to south and from south to north simultaneously, carrying out a deterrence mission around the island.

Now that the PLA extended the drills, and it practiced joint anti-submarine warfare and sea assault operations on Monday.

Fu Qianshao, a Chinese mainland military aviation expert, told the Global Times that the PLA is expected to continue to practice different tactics and combat elements, including the involvement of aircraft carriers and amphibious landing warfare.