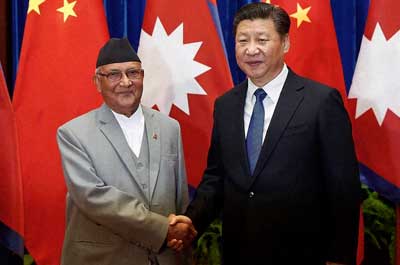 During the meeting, both the leaders held a discussion on key issues regarding taking the relations between the governments and Communist Parties of both the countries to a new height.

Delegation-level meeting has now begun following the meeting between the two top leaders. Earlier before visiting the Chinese President, Prime Minister Oli paid tribute to the statue of Chinese leader Mao Tes-Tung. Prime Minister Oli had embarked on official visit to China on Tuesday at the invitation of his Chinese counterpart Li Keqiang.