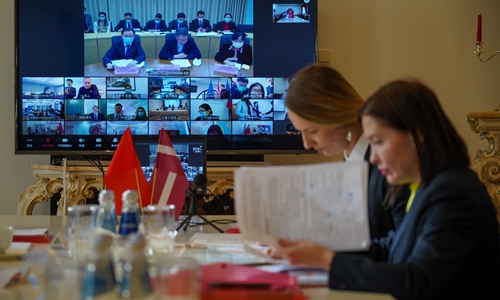 By Global Times (3 April 2020) – Some European politicians have recently politicized the COVID-19 pandemic, smearing China’s goodwill in helping Europe with the fight against the virus. This narrow-minded, ideological and politicized mentality is not helpful to combat the coronavirus or conducive to promoting the comprehensive development of China-Europe relations.

During a time when globalization has been impacted, politicization of any issue – which has become a strategy of protectionists and populists to mobilize people and create confrontation – will harm the relations between countries. Some European politicians have maliciously politicized China’s goodwill, conjecturing that the country aims to split Europe. This is nit-picking.

European countries didn’t recognize the severity of the novel coronavirus outbreak and failed to take appropriate measures to some extent due to cultural differences. When Chinese doctors and scientists called on people to wear face masks for protection, Europeans still believed only sick people needed to wear face masks. Despite these differences, China and Europe must jointly combat the pandemic, not only to protect people’s health but also to ensure the economic stability of the two sides.

China has attached great importance to the cooperation with Europe to combat COVID-19. It has timely shared information and experience with Europe, provided Europe with medical supplies and sent medical teams to countries severely hit by the novel coronavirus. In contrast, Europe didn’t show solidarity in the face of the pandemic while the European Union failed to respond in time or show strong leadership.

This has impacted the strategic autonomy the EU is seeking and thus led to complicated sentiment toward China’s aid. Europe needs China but it doesn’t really trust China. There has been some discord in the two sides’ joint battle against the virus. For instance, some have claimed that face masks and test kits from China had quality issues. This was a misunderstanding caused by different criteria, but it has reminded us that China must strictly supervise the quality of its exports while China and Europe need to strengthen communications concerning standards and needs.

Nonetheless, some Western media outlets and politicians have taken advantage of this misunderstanding and politicized the issue. They have slandered China, saying the country’s intention is to erode the EU’s values and coherence and thus split the bloc.

Over the past few years, the EU has been in urgent need of internal solidarity as it became more sensitive to external changes. This being the case, Europe has been vigilant concerning China, whose moves have been portrayed negatively: “China aims to split the bloc,” “China is exporting its values,” and so on.

In this context, politicizing the supply of personal protective equipment from China could be a move to steer public opinion toward support of the EU’s plan to reallocate the industry chain. However, in the globalization era, decoupling from China will harm Europe and China as well. Take the friction between China and the US. The decoupling between the world’s two largest economies will eventually harm the peoples of both countries and global stability.

China has done what any responsible large country should do to help tackle this crisis. All countries are a community with a shared future and China’s cooperation with Europe to combat the coronavirus is a move that will help protect not only Europeans but all mankind.

However, the fight against the pandemic has turned into a war of words due to some Western politicians’ malicious intention to pass the buck. This will hinder solidarity within the EU and negatively influence European countries’ cooperation with countries in other regions.

Cooperation is the backbone of China-Europe relations, which should not be affected by some occasional discord. Cooperation is based on mutual trust, with which China and Europe will become a stronger driving force for world governance and multilateralism.

The author is a research fellow with the Institute of European Studies, Chinese Academy of Social Sciences. [email protected]