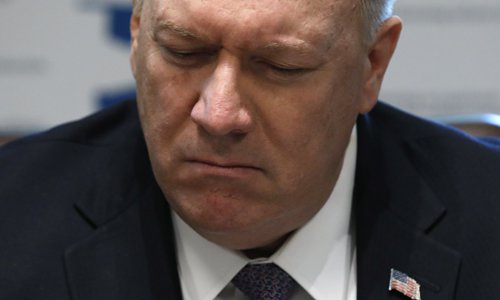 Global Times (10 November 2019) – US Secretary of State Mike Pompeo, in a speech at an event commemorating the 30th anniversary of the fall of the Berlin Wall in Berlin on Friday, took a swipe at China and the Communist Party of China (CPC).

He claimed the CPC “is shaping a new vision of authoritarianism, one that the world has not seen for an awfully long time.” He was telling a big lie. Pompeo in recent days has continuously lambasted the CPC, trying to drive a wedge between the Chinese people and the ruling party. Such political arrogance makes him muddleheaded. This is not what a major country’s secretary of state is supposed to be.

The Berlin Wall not only separated East and West Berlin, but also symbolized the isolation between the East and the West at that time. Today’s China is highly open. We encourage the free flow of people and goods between China and the US in accordance with internationally accepted rules. But the US, who promoted the demolition of the Berlin Wall, is building walls, from the tangible walls at the Mexico-US border to the invisible ones between China and the US. Some Americans have become less and less confident, playing tricks rather than carrying out sound competition with others. Thirty years after the end of the Cold War, the US elites that dominate Washington’s policies now are unpromising.

The CPC changed China’s miserable fate of being poor and weak and being bullied and humiliated, reshaping the livelihood in the country. This is the primary task of China’s rejuvenation and the biggest demand of society. People like Pompeo use the logic of the US to look for differences in interests between the ruling party and the public in China. They don’t understand the nature of the CPC, but define the Party of 90 million members with Western theories. They know nothing about Chinese politics.

China has maintained friendly and cooperative relations with the vast majority of countries. Charges such as “debt trap,” a term coined by the US, cannot screw up the relations. There are territorial disputes between China and some neighboring countries, but they have managed frictions well through concerted efforts. China so far has not slipped into full confrontation with any of them. Friendly cooperation is the theme in the Asia Pacific.

Differences in values are regarded by Pompeo and people like him as a major tool to contain China. However, there are no major interest conflicts between China and most Western countries. To realize common interests through cooperation has gained momentum. Interests are more important than ideology in defining state-to-state relations. As US secretary of state, does he not understand this? He repeatedly stressed the US and European countries share the same values, demanding the latter to stand with the US against China, Russia and Iran. How can he raise such selfish requests?

Pompeo demanded that Germany refuse Huawei equipment and give up the construction of natural gas pipelines with Russia. The US has defined China and Russia as strategic competitors. Changes have taken place in the international landscape. Shouldn’t Europe seek to maximize their own interests in the new context rather than taking the old path? European countries have no reason to sacrifice their own interests for some US elites’ new Cold War fantasy.

The CPC has led China to prosperity. China has not engaged in a war in 30 years and has insisted on a national defense policy defensive in nature. It is the biggest trading partner of over 100 countries and regions. Is it possible to turn such a country and its ruling party to a “common enemy” of the world? American elites such as Pompeo have become hysterical due to their ideological paranoia, that’s why they keep targeting China in a rude and stupid manne