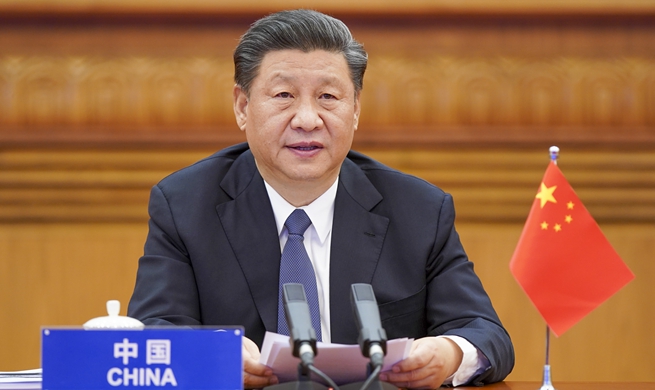 BEIJING, Feb. 9 (Xinhua) — Before and during the Beijing 2022 Olympic Winter Games, China has greeted more than 30 international dignitaries who came to China to enjoy the sporting gala. Among them are heads of state, heads of government, members of royal families, and heads of international organizations.

This grand gathering is a perfect manifestation of an ancient Chinese aphorism, “Even mountains and seas cannot distance people with common aspirations.” Chinese President Xi Jinping has quoted this sentence on many diplomatic occasions.

The aphorism first appeared in Baopuzi, a book by Ge Hong, a Taoist scholar and medicine expert from the Eastern Jin Dynasty (317-420). In this metaphorical sentence, Ge expressed that when having common aspirations, people will feel close to each other even if they are in different parts of the world.

For many of the heads of state who came to China for the occasion, some of them had to take long flights that last tens of hours before arriving in Beijing, not to mention the ongoing pandemic which seriously hampers international commuting. However, against all odds, they chose to come to China in person, bringing their best wishes for the Games and its host country.

Many of the visiting leaders, as well as athletes who are competing in the Games, have voiced their opposition of politicizing sport. This contrasts sharply with the clamor of a so-called diplomatic boycott from some Western politicians.

At a welcoming banquet and bilateral meetings with the “old and new friends,” Xi expressed his appreciation to all those who came to Beijing to cheer for the Olympic Winter Games and for China.

“The Olympic Movement has carried humanity’s aspirations for peace, solidarity, and progress,” Xi pointed out in his toast at the welcoming banquet. By hosting another successful Olympic Games, China is reaching out to all those who share these aspirations and sending a clear message: no matter what hardships await, the world is sure to be brought together.