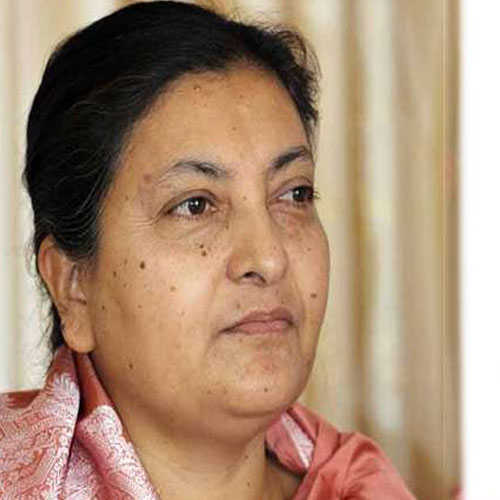 In her address to the ‘senior former ambassadors felicitation ceremony’ organised by the Association of Former Ambassadors of Nepal at the Rastrapati Bhawan, Shital Niwas today, the President was of the view of further strengthening the nation’s foreign relations by bearing its geopolitics and aspiration for economic development in mind.

“The core value of our foreign policy is friendship with all, we cherish the goal of connecting the world with the bond of friendship,” the President said, adding the State would always remember and acknowledge the role and contribution of former ambassadors in promoting nation’s pride and prestige through the means of diplomacy.

“The success of former ambassadors in holding the nation’s head high amidst several challenges was the bright side of Nepal’s history,” the Head-of-the-State added.
On the occasion, senior former ambassadors Yog Prasad Upadhyay, Surya Prasad Shrestha, Kamal Koirala and Prof Dr Mohan Lohani were honoured.
Minister for Foreign Affairs Pradeep Kumar Gyawali who was also present on the occasion expressed his happiness over the role that (former) ambassadors played in boosting up nation’s image and consolidating mutual ties during the period of political transition at home.

As he said, a successful diplomacy is important in view of countries like Nepal to promote one’s existence, development and interests.
He said Nepal’s capability gets reflected in its success of promoting one’s interest by establishing and maintaining balanced ties with neighbours.
Diplomatic development remains as the important factor for the country like Nepal and a role of ambassador is comprehensive towards that end. Only the right foreign policy of any nation is not enough for the successful diplomacy, but it is determined by the nature of its operators and ministry’s mechanism, according to him.

Honoured personality Shrestha suggested the Ministry to make correction to its ‘understanding’ that only people retired from the foreign service were the diplomats. He sought proper recognition to the contribution of ambassadors.

Giving his logic, Association chair Dr Shambhu Ram Simkhada said Nepal-like small countries should be able to address national interest through diplomatic cleverness. Former Ambassador Upadhyaya had served as the ambassador to the United States of America, Shrestha to the United Kingdom, Koirala to South Korea and Prof Dr Lohani to Bangladesh.