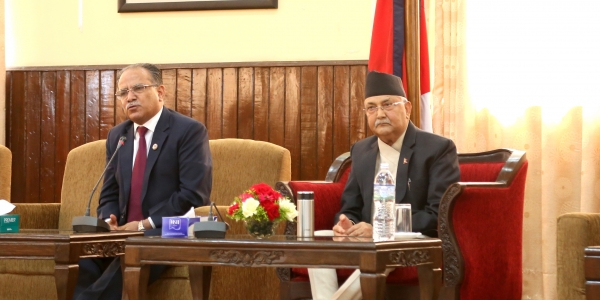 Prime Minister Oli, while addressing an interaction program organized by FNCCI Morang District in Baluwatar, said the trade barriers with  India would be resolved soon.

‘I will talk to Indian Prime Minister Narendra Modi to reduce the trade deficit stayed between Nepal and India when he comes to Nepal to attend the BIMSTEC summit” Prime Minister Oli said.

Indian Prime Minister Modi including other head of the states and governments are coming to Nepal for the fourth  BIMSTEC summit. As a Chair of this regional forum, Nepal is hosting the fourth  summit in Nepal on 30-31 August.

Prime Minister Oli assured the business community that there would be no such problem between Nepal and India to hinder the smooth free flow of goods.

He said that he is dispatching a team led by Joint Secretary of the commerce ministry to India to hold discussion with Indian officials to remove the current misunderstanding hampering bilateral trade.

‘I will  talk to all the head of governments of BIMSTEC collectively and individually about resolving the problems of our common trade’  said Prime Minister Oli.

He said  the right time has come to change the identity of Nepal through the joint effort of the government and entrepreneurs. ‘We should change the identity of Nepal from importer to exporter, poor to rich, traditional to modern and unemployed to employed Nepal’ he said, ‘for this to happen, the government and private entrepreneurs should jointly move forward’.

He also urged the businessmen and industrialists to think and put forth the innovative plan assuring the full commitment of the government to implement them.  Prime Minister Oli said there was a need  to reduce the trade deficit, maintain the trade balance and change the economic condition of the country

‘We have been saying that we will change the economy of the country but we have not been able to follow that spirit of fast pace of development ‘ he said, ‘the journey of economic change should be fixed through joint effort of government and entrepreneurs’.