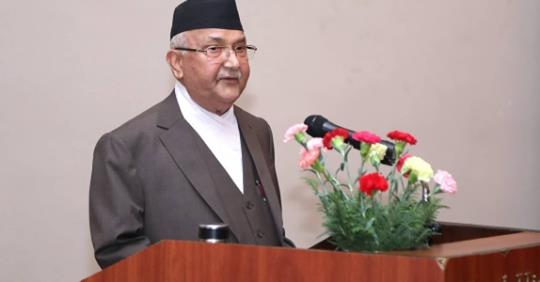 During the visit, Prime Minister Oli is scheduled to address as a panelist, two separate sessions on ‘Strategic Outlook on South Asia’ and ‘Shaping the Future of Democracy’ to be held on 22 and 23 January respectively.

He will also address the Informal Gathering of World Economic Leaders on the theme of ‘The End of Global Trade as We Know It?’ on 23 January.
Earlier, on arrival at the Zurich Airport, the Nepali delegation led by Prime Minister Oli was welcomed by Nepali Ambassador to Switzerland Deepak Dhital.

This year’s WEF Annual Meeting is being held on 22-25 January on the theme of ‘Globalization 4.0: Shaping a Global Architecture in the Age of the Fourth Industrial Revolution’.

Prime Minister Oli will also hold meetings with political as well as business leaders during the visit. He is accompanied by his spouse Mrs. Radhika Shakya.