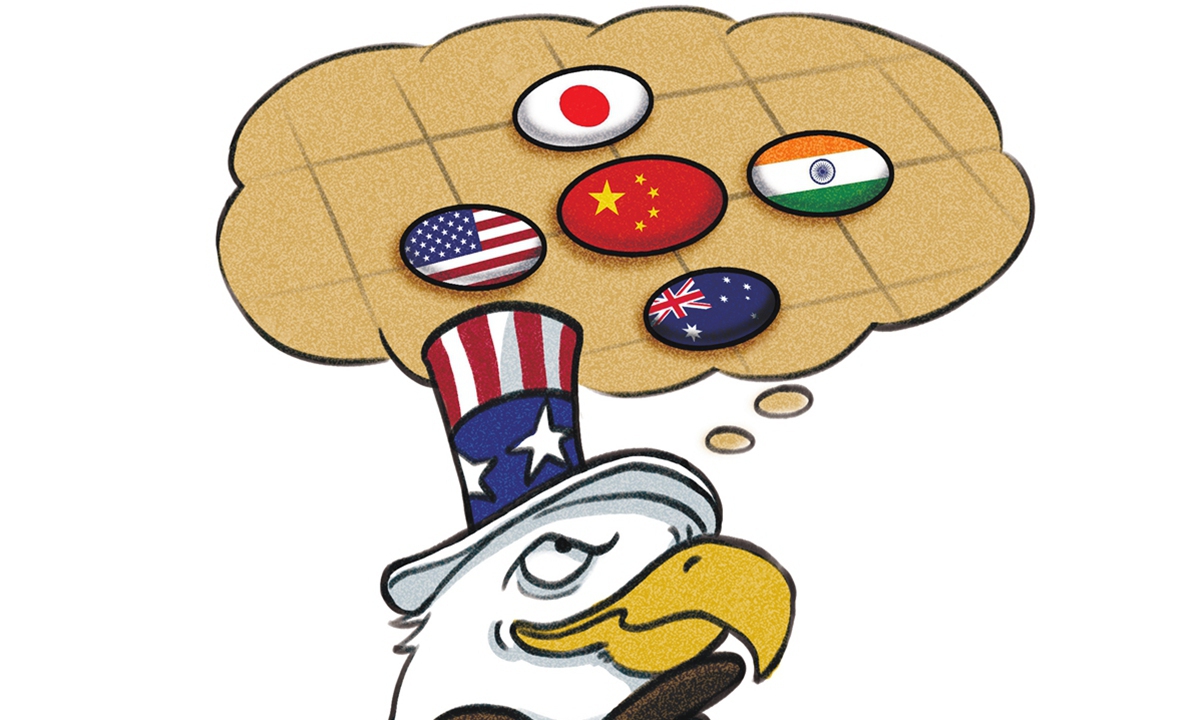 Global Times (24 September 2021) – Leaders of the US, Japan, India and Australia will meet in Washington on Friday for the first in-person Quad summit. Despite claims of “maintaining a free and open Indo-Pacific region,” the Quad mechanism is engaged in splitting the region and inciting various forces to oppose China. The summit in Washington can be seen as a twisted ribbon-cutting of shaping this confrontational pattern.

The purpose of the Quad mechanism is to “encircle China.” Its geographic situation gives a sense of comfort to the political elites of the four countries. It remains vague as to what to be encircled about China. Every element contains a great deal of imagination. As a result, the agenda of the Quad is rather distorted and full of paranoid extensions, like argots which are ambiguous but can be understood by conjecture.

For instance, Quad members’ “opposing challenges to the maritime rules-based order” is such an argot. The maritime order, including the freedom of navigation, has never been challenged. The so-called maritime order referred to by the US and Japan is maritime power, while the “rules” are the hegemony or vested interests of maritime countries such as the US and Japan. When talking about this subject, the Quad mechanism often confines it to the South and East China Seas, in a bid not to touch the Indian Ocean, a sensitive spot for New Delhi.

“Creating a safe supply chain” is another argot. Transnational supply chain is the natural result of global division of labor, which itself is the product of marketization. In order to curb China, the US has begun to develop the supply chain of key technology products excluding the Chinese mainland. The semiconductor sector is the first to bear the brunt. No matter how much rhetoric is applied, these attempts in supply chain are anti-market, politically prioritized, aimed at creating confrontation, and thus immoral and evil.

Japanese Prime Minister Yoshihide Suga said on Wednesday ahead of his trip to Washington that “The changing power balance brought by the rise of China in the Indo-Pacific, along with the increasing inward focus spurred by the pandemic have increased uncertainty.” He also hyped that China’s growing military strength “could present a risk to our country’s peace and prosperity.”

Development is the sacred right of 1.4 billion Chinese people. An economic rise has brought about the constant growth of China’s GDP, which will inevitably bring about an increase in military spending and modernization. However, China’s military budget is less than 1.5 percent of its GDP. China adheres to the principle of no-first-use of nuclear weapons, and hasn’t launched any war against other countries in decades. Even though countries like Japan are inherently concerned about China’s rise, they should express their concerns in a restricted way. From this perspective, engaging in the Quad that aims at confronting China is a seriously irresponsible move. It has been accelerating the uncertainties that are perceived by many countries to the certainty of confrontation.

The Quad mechanism itself can do no harm to China. This is because it may form a siege of China, but will never block China’s long-lasting development and rise, or Chinese people’s diligence and resolve to make progress. This also applies to AUKUS. Nonetheless, these new alliances have declared the start of the era of conflicts and confrontations. They will bring about macro and profound changes to spheres from global structure to codes of conduct.

The Asia-Pacific region needs to struggle with the “sinister gang” represented by the Quad and AUKUS, giving geopolitical hysteria no chance to destroy the future of the Asia-Pacific. Although the Quad claims to be a values-based alliance, the members obviously know they are engaging in controversy and creating strategic risks. Therefore, they dare not clarify how they exactly define the Quad, with the four members interpreting the bloc in different ways.

The US intends to turn the Quad and AUKUS into “sinister gangs” containing China. On one hand, it stubbornly strengthens to deepen the anti-China cooperation of the Quad mechanism. On the other, it will gradually lure other countries in the region to join the gang. We appeal to other regional countries not to be fooled by Washington. They should refuse to be geopolitical pawns of the US against China, or to become cannon fodders of Washington.

China’s continued development and strength can never be stemmed. We have no desire to become a strong international power. China’s win-win development path with other countries is full of vitality and continues to become mature. It is in the best interests of all countries to strengthen cooperation with China and avoid being instigated by the US to engage in confrontation. It is believed that the vast majority of regional countries have sufficient determination to keep their strategic sobriety.

We must warn solemnly Japan, India and Australia not to follow the US too far in confronting China. Once they step on the red line of China’s core interests, China will not care about their relations with the US, and China will not hesitate to punish them.