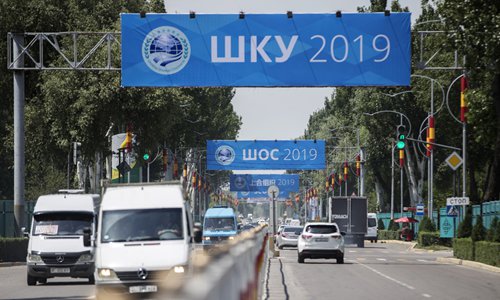 By Global Times (13 June 2019) – Chinese President Xi Jinping is to attend the meeting of the Council of Heads of State of the 19th Shanghai Cooperation Organization (SCO) summit in Bishkek, Kyrgyzstan on Friday.

Over the past 18 years, as Xi said at the 18th SCO summit in 2018, “guided by the SCO Charter and the Treaty on Long-Term Good-Neighborliness, Friendship and Cooperation Between the Member States of the Shanghai Cooperation Organization, we have forged a constructive partnership featuring non-alliance, non-confrontation and not targeting any third party.”

The SCO has always been a successful transnational mechanism dealing with regional security and stability, achieving satisfactory results in recent years.

Horizontal comparisons bring out the SCO’s importance. Taking a look at the situation in the Middle East and North Africa, one can realize that Central Asia’s immunity to such chaos cannot be delinked from the SCO. The Balkans got mired in chaos after the disintegration of Yugoslavia. But no such turmoil has been seen in Central Asia since the Soviet Union broke up. The SCO has played a vital role in regional stability.

Fully understanding and affirming the SCO’s significance helps to promote its development.

The SCO has played a very important role in stifling three extreme forces – religious extremism, separatism and terrorism. But the rise of such forces is directly related to underdevelopment.

When development is sound, people are brimming with confidence for the future and are unlikely to yield to the call of extremism. Hence, only by further development and promotion of economic prosperity, can people avoid falling to the temptation of extremist forces and desist from doing irresponsible things.

In this context, in addition to preventing major conflicts in the region, the SCO should extend its role to providing people with hope for the future.

Moreover, today’s US government is messing things up and falling out with almost all its past trade allies. Not only has it started a trade war with China, but has also been in conflict with its neighbors like Canada and Mexico, leaving the world economy in an agitated state.

Investors are hesitant to risk their money if they see poor economic prospects, eventually driving the world economy to recession.

SCO members need to strengthen cooperation, injecting development momentum into the region by making it attractive for investors. Currently, amid an unstable global economic climate, investors from all over the world are clamoring to find new investment opportunities. If the SCO member countries can take advantage of the China-proposed Belt and Road Initiative, bring the entire region together, and create better chances of market integration, international investors and traders will likely flock to the region, bringing in continuous investments and creating a virtuous cycle for the region.

As long as the economy develops, investment increases, and the entire region flourishes, the SCO can put in less effort into regional security and stability, because the people will naturally be immune to extremist forces.

The article was compiled by Global Times reporter Yan Yunming based on a speech delivered by Ding Yifan, a senior researcher of Taihe Institute and former deputy director of the Institute of World Development, Development Research Center of the State Council, in a video conference linking Moscow, Bishkek and Beijing hosted by Rossiya Segodnya on June 11. [email protected]