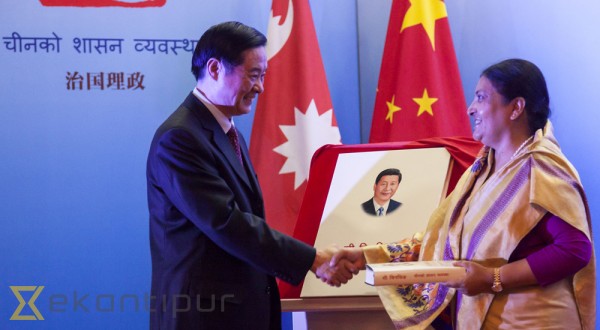 KATHMANDU, 18 December – Senior leader of the Communist Party of China and Head of the Party’s Propaganda Department Liu Qibao has arrived in Kathmandu on a three-day official visit to Nepal.

Qibao is one of the seven politburo member of CPC, the highest official body of the party. He is the most high-profile Chinese Leader to Nepal in the last three years.  According to the Chinese Sources, Qibao is leading 25-member delegation to Nepal.

His visit has been seen as significant at a time when Nepali political parties are quarrelling in the domestic issues of constitution amendment, election.  Though the amendment of the constitution is purely the internal issue of our, Prachanda-led government has invited India as one of the stakeholders of this issue.

According to sources, the Chinese leader will take stock of Nepal’s current situation and see the potential visit of Chinese President Xi Jinping. Xi’s prospective visit to Nepal in mid-October couldn’t  happen following a sudden change of guard in August.

”If the Chinese side is convinced that Nepal is committed to move forward all Sino-Nepal agreements and quite to welcome President Xi, the latter might pay state-visit to Nepal in the first half of 2017.” a chinese source said.