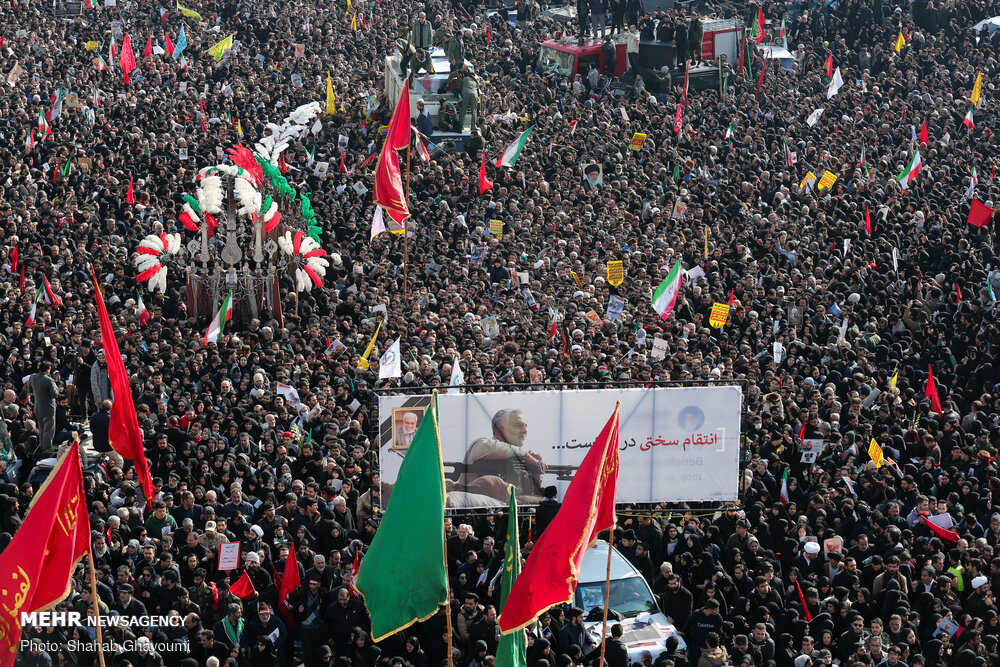 BBC (6 January 2020) – Huge crowds packed the streets of the Iranian capital Tehran for the funeral of the slain Iranian military commander Qasem Soleimani.

Soleimani was assassinated in a US drone strike in Iraq on Friday on the orders of President Donald Trump.

Iran has vowed “severe revenge” for the death of Soleimani and on Sunday pulled back from the 2015 nuclear accord.

Soleimani, 62, headed Iran’s elite Quds Force, and was tasked with protecting and boosting Iran’s influence in the Middle East.

Soleimani was hailed as a national hero in Iran and widely considered the second most powerful man in the country behind Supreme Leader Khamenei.

The US saw him as a terrorist, and justifying the killing President Trump said Soleimani was plotting “imminent” attacks on US diplomats and military personnel.

What happened at Soleimani’s funeral?

State television showed huge crowds in Tehran for the event. It put the number who turned out as “millions” although this is yet to be verified.

People cried while others clutched pictures of the late commander. Mourners passed his coffin over their heads and “death to America” chants were heard.

His daughter Zeinab Soleimani warned the US it faces a “dark day” for the killing. “Crazy Trump, don’t think that everything is over with my father’s martyrdom,” she said.

Following Monday’s funeral, the general’s remains will then be taken to Qom, one of the centres of Shia Islam, for a ceremony ahead of a funeral in his hometown of Kerman on Tuesday.

How has Iran responded to the killing?

On Sunday Iran declared it would no longer abide by any of the restrictions imposed by the 2015 nuclear deal.

The deal limited Iranian nuclear capacities in exchange for the lifting of economic sanctions.

Three European parties to the deal – Germany, France and the UK – urged Iran to abide by its terms.

Also on Sunday, Iraqi MPs passed a non-binding resolution calling for foreign troops to leave. US forces were invited to return to Iraq to help defeat the Islamic State group.

The new head of Iran’s Quds force has vowed to expel the US from the Middle East.

How has Trump reacted?

Following warnings from Iran, Mr Trump said that the US would respond in the event of retaliation for Soleimani’s death, “perhaps in a disproportionate manner”.

He repeated a threat to target Iranian cultural sites, saying the US would “strike very fast and very hard” if Tehran attacked Americans or US assets.

“We have a very extraordinarily expensive air base that’s there. It cost billions of dollars to build. We’re not leaving unless they pay us back for it,” he told reporters.

What are Iran’s key cultural sites?

The suggestion that the US could target Iranian cultural sites sparked alarm in Iran and beyond. Such action could be considered a war crime under international law.

Iran is home to two dozen Unesco World Heritage sites. These are sites that the UN’s cultural organisation believes need preserving for their cultural, historic or scientific significance. These include:

There are also a number of sites which – while not listed by Unesco – still retain huge cultural importance ,such as the Mausoleum of Ruhollah Khomeini, dedicated to the Islamic Republic’s founder.