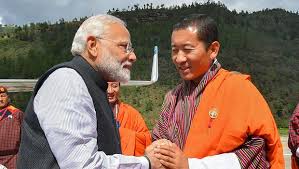 NEW DELHI (The Hindu Editorial, 20 August 2019) – Prime Minister Narendra Modi’s two day visit to Thimphu affirmed a long-standing tradition between India and Bhutan, where the leaders of both countries have given visiting each other a major priority early in their tenures.

Mr. Modi returned a state visit to India by Bhutan Prime Minister Dr. Lotay Tshering in December 2018; this visit was actually delayed to include outcomes such as the inauguration of the 720 MW Mangdechhu hydropower plant. The relationship is indeed built on a traditional closeness, one that is unique in today’s world.

Open borders, close alignment and consultation on foreign policy, and regular, open communications on all strategic issues are the hallmark of the relationship that has maintained its consistency for the past many decades. Bhutan’s unequivocal support to India on strategic issues has meant a lot to India on the international stage and at the United Nations. Equally, Bhutan’s leadership has not flinched in opposing threats to India; for instance, the former King’s efforts in 2003 to drive out ULFA rebels or more recently, support for India’s stand against Chinese troops on the Doklam plateau.

India’s assistance to Bhutan’s planned economy, to constructing its highest revenue earner of hydropower generated electricity, and then buying the electricity generated has also ensured a symbiotic and mutually beneficial base to the relationship, which has been nurtured by the leaders in both countries, in a manner Mr. Modi called “exemplary”.

It would however, be a mistake for New Delhi to take the relationship with Thimphu for granted. In the past few years, ties came under a strain over India’s sudden change in its power purchasing policy, rigid rates and refusal to allow Bhutan to join the national power grid and trade with third countries like Bangladesh.

These issues are being addressed now. Another concern that could create differences is over Bhutan’s worry that too much trade, transport and tourism from India could put its environment at risk. India’s plans for a Motor Vehicles Agreement (MVA) in the Bangladesh-Bhutan-India-Nepal grouping have been held up, and a Bhutanese proposal to levy entry charges on Indian tourists could cause differences with India. Earlier generations of Bhutanese students never looked beyond India, but in recent years young Bhutanese have shown a preference for education destinations in Australia, Singapore and Thailand.

There is thus much to repair in the ties. More importantly, New Delhi will have to remain alert to strategic powers which are courting Bhutan assiduously, as is evident from the high-level visits from China and the U.S. In a world of growing options, it remains in India’s and Bhutan’s best interests to make each other’s concerns a top priority.