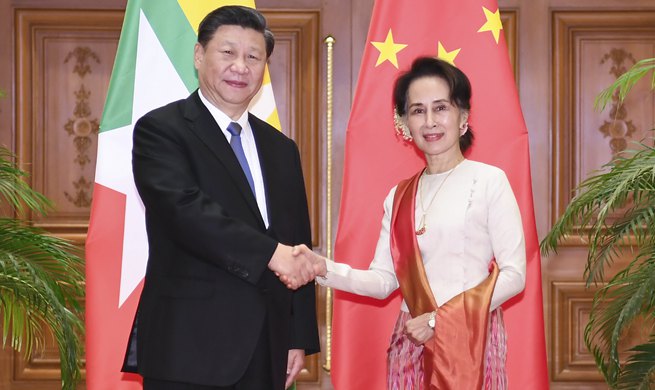 Xinhua (NAY PYI TAW, 19 January 2020 ) — Chinese President Xi Jinping’s state visit to Myanmar, his first overseas trip this year, is another important practice for China to promote the building of a community with shared future for humanity in the region, Chinese State Councilor and Foreign Minister Wang Yi said on Saturday.

During the visit, Xi attended 12 events and witnessed the signing of 29 cooperation documents in various fields, Wang said, adding that the two sides have also issued a joint statement.

The Myanmar side has for long highly expected Xi’s state visit, Wang said, noting that the Chinese president was met with the highest courtesy and a grand reception by the Myanmar side.

Wang said that during Xi’s visit, China and Myanmar have agreed to work together to build a community with shared future, opening a new era of bilateral ties.

This decision conforms to the trend of the times, meets expectations of the two peoples and injects new impetus and vitality into bilateral cooperation, Wang said.

All sectors of the Myanmar society have responded positively to the decision, with the Myanmar leadership expressing support to Xi’s proposal of building a community with shared future for humanity, Wang said.

During the meetings, Myanmar State Counsellor Aung San Suu Kyi said that China has always been a good friend of Myanmar, and fate has bound the two sides closely, according to Wang.

To celebrate the 70th anniversary of bilateral diplomatic ties, Wang said the two countries agree to hold the China-Myanmar Year of Culture and Tourism, and to carry out over 70 activities, covering education, tourism, culture and other fields.

The two sides agreed to promote the construction of the Kyaukphyu Special Economic Zone, the New Yangon City, the China-Myanmar Border Economic Cooperation Zone, as well as roads, railways and power and energy infrastructures.

It marks the transition of the China-Myanmar Economic Corridor (CMEC) from conceptual planning to substantive construction, Wang said.

China is willing to work with Myanmar to steadily advance the construction of key cooperation projects in the CMEC within the framework of jointly building the Belt and Road, bringing local people more benefits and giving them stronger sense of gain and happiness, Wang said.

For the Myanmar side, its leaders said that the construction of the economic corridor under the framework of the Belt and Road Initiative is of great significance to Myanmar’s national development, Wang said.

Myanmar Commander-in-Chief of Defense Services Min Aung Hlaing also pledged that the Myanmar military will firmly support and promote the joint construction of the Belt and Road, Wang added.

Noting that the world is undergoing profound changes unseen in a century, Wang said injustice and inequality remain prominent in international relations, and protectionism, unilateralism as well as bullying actions are rising against the trend.

Developing countries, including China and Myanmar, are facing new challenges in safeguarding their sovereignty, security and development interests, he said.

When meeting with Myanmar leaders, Xi stressed that all countries have the right to choose a development path suited to their national conditions.

The development path chosen by the Chinese people is successful, and the Chinese will continue to follow the path unswervingly, Xi said, adding that China is willing to share its experience in poverty alleviation with Myanmar.

Myanmar felt sincere happiness for China’s success, Wang quoted Myanmar leaders as saying, adding that the Myanmar leaders expressed their hopes that China will share more experience in state governance with Myanmar and other developing countries.

Myanmar staunchly abides by the one-China principle, firmly supports China in safeguarding its core interests, and stands unshakably on the side of Chinese friends, they also said.

Xi, meanwhile, stressed that China is committed to peaceful development, will never seek hegemony or interfere in other countries’ internal affairs, and will continue to speak out for justice for developing countries on the international stage.

China supports Myanmar in moving forward along the development path it has chosen and in safeguarding its legitimate rights and interests and national dignity on the international stage, Xi said.