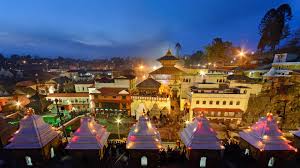 Nepal Foreign Affairs (KATHMANDU, 13 August 2019) – Members of the National Assembly (NA) have stressed the need of developing the Pashupati area, the UNESCO world heritage site, into a religious tourism site of international standard.

In a meeting of the NA’s National Concern and Coordination Committee today, the Committee members sought further management of the Pashupati area. Committee President Dil Kumari Rawal promised that if the Committee was briefed about practical and legal issues to integrate immovable and movable properties in the name of Pashupati area, the Committee would arrange a meeting with all bodies concerned to seek solutions to the issues.

Presently, a master plan concerning the Pashupati area is being developed and the Committee suggested the plan could envision the development for 50 years. The lawmakers presented the views for modernising the gaushalas (cow shelters) operated in the Pashupati area and promoting quality infrastructures.

The voices were raised for further systematising the Nepal Ved Vidhyashram (a Sanskrit school) operated by the Pashupati Area Development Trust, for connecting its heritages with tourism, preventing the misuse of its property so as to make it self-dependent.

Well management of the Aryaghat area was also sought during the meeting. Dhana Khatiwada, Komal Oli, Deepa Gurung, Khimlal Bhattarai, Khemraj Nepali and Surendra Raj Pandey were among those putting their views in the meeting.

In response, PADT member-secretary Dr Pradeep Dhakal said the government had allocated Rs 3.5 million for the physical development of Pashupatinath area. He shared the PADT was resisting a plan of a certain group to use Pashupati area as a dumping site and making efforts to make it a failure. He complained of the absence of necessary cooperation towards that end.