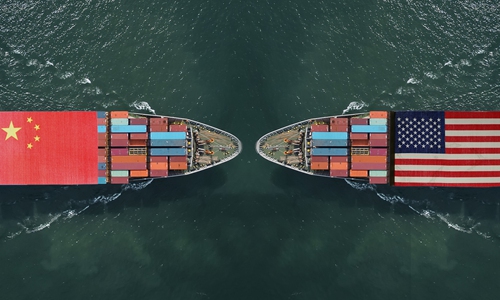 Global Times (15 May 2020)- US President Donald Trump said on Thursday the US “could cut off the whole relationship” with China, claiming that such a move would save the country $500 billion. Trump made the remarks during an interview with Fox Business. The very idea should not come as a surprise for those who remember when Trump speculated if disinfectants could be used on humans “by injection” to wipe out the novel coronavirus (COVID-19).

Trump is the first US president in the modern era to suggest the country “could cut off the whole relationship” with China. His remarks were considered exceptional, and even by hawkish politicians in Washington. US lawmakers have been notorious for making radical comments about China, while the president and his administration play the role of mediator. However, there seems to be an anti-China competition underway between the House of Representatives and the White House, and also between Republicans and Democrats.

Such lunacy is a clear byproduct, first and foremost, of the proverbial anxiety that the US has suffered from since China began its global ascension.  It is also a combination of envy and panic on behalf of Washington elites who recognize the substantial gap between the US and China in how both countries responded to the pandemic. And finally, Trump’s threat is linked directly to the upcoming US presidential election this November. The Trump administration’s response to COVID-19 was weak and inefficient. It seems the White House strategy is to risk it all by passing the buck to China. Trump’s behavior is a desperate attempt to safeguard against the possibility that US public opinion could turn against him due to his lack of accountability.

The Trump administration routinely expresses dissatisfaction with China and has suggested decoupling from the country on multiple occasions. As the US presidential election approaches, until then, it will be of no surprise to hear more absurd ideas from Trump and his team on how China should be treated.

It isn’t necessary for China to be intimidated by US government threats. Maintaining exchange is mutually beneficial and not a charitable act from either side. China doesn’t believe that Washington will “cut off the whole relationship” with them as that would violate the basic principles of 21st-century logic. Furthermore, Trump couldn’t make it happen. The White House administration often overestimates their capabilities to drive historical reversals. Rest assured, time will teach them a lesson.

However, China should be prepared for a partial or complete decoupling in vital sectors, including technology, the economy, humanities, and social sciences. US public opinion, misguided by American politicians, could fuel such trends. It is foreseeable that Washington could take significant action to cut off China relations, which would undoubtedly impact both countries.

China could easily overcome “pro-decoupling” sentiment by focusing on domestic development. The country must remain vigorous in developing advanced technology without relying on the US, and its abilities to expand the domestic market. Simultaneously, China needs to optimize its policies for opening-up and expanding exchanges with developed countries.  China’s attractiveness would dissolve Washington’s decoupling fantasy.

The inanity displayed by US politicians is not formidable. Now is not the time for the US to play with China. The US is still struggling with the COVID-19 pandemic, and its work resumption efforts are taking risks that will only give rise to a second COVID-19 outbreak. A single shred of evidence exists that indicates the US will recover from the impact of COVID-19 in the short term. Proof of this can be found in how their domestic production capabilities and markets are engulfed in chaos. The Trump administration is trying to convince American voters of the importance of fighting with China to win in November. China will not be distracted by their political shenanigans and will maintain its strategic focus.