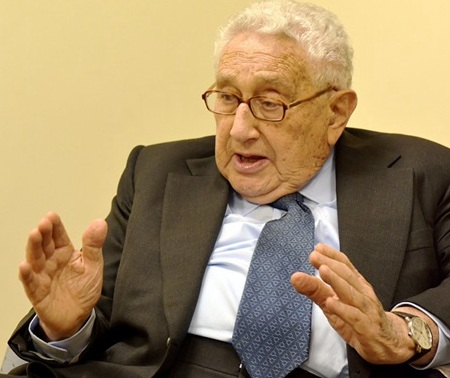 Henry Alfred Kissinger served as U.S. National Security Advisor and later concurrently as Secretary of State under administration of Presidents Richard Nixon and Gerald Ford. His advice is sought by many subsequent presidents even after his term. Always a good friend to Chinese people, Dr. Kissinger’s talk with then Chinese Premier Zhou Enlai in 1971 led to the rapprochement of U.S. and China. China’s People’s Daily had an exclusive interview with Dr. Kissinger at his office in New York on September 10th, 2015.

People’s Daily: Dr.Kissinger, you have met President Xi several times. It’s not easy at all to govern a country like China. What’s your impression of Xi?

Dr. Kissinger: I have had many conversations with President Xi. He is a man of great determination, who has strong lessons from the experiences of his life, and so I think he is among the rank of the most significant of China.

People’s Daily: President Xi is going to pay a state visit to U.S., what should top the list of president Xi’s state visit and what are your expectations for this visit?

Dr. Kissinger: What is most important for China and U.S. both is to base their policy on the recognition that they are two great countries who need to work in cooperation, not in confrontation- that is the key thing. And then they should apply this conclusion to a number of concrete issues, and I am very hopeful that progress would be made. I am of a different political party from President Obama, but I fully support efforts by president Obama to achieve these objectives.

People’s Daily: You are a very wise man and you opened the great relation between China and U.S., and you have witnessed the development of this relation for more than 40 years. There are a lot of ups and downs in the process of this relation. According to you, historically speaking, how do you see this relation now and what’s kind of wisdom do we need to manage those differences?

Dr.Kissinger: well, you know when the relationship started, China was at the very beginning of its economic development. If anybody had shown me in 1971 a picture of what Beijing and Shanghai look like today, I would have said that this is crazy, it can not happen. And it’s been achieved so tremendously. I always look at china with the memory of 1971. Though there had been enough economic difficulties, they’ve been overcome, so I don’t pay too much attention to it. Now, In the relation between U.S. and China, when we started the relationship, we had a common adversary. But now we don’t have a common adversary.

But we have common opportunities. If we don’t work together, many of them can’t be reached. Some of the problems cannot be solved alone by either China or the U.S., like the climate, environment, proliferation, weapons of massive destruction, or cyber. These are all the things we need to deal with together. Some of these are totally new, like cyber, that didn’t exist when I first came to China, so of course there will be problems. I am very hopeful that President Xi’s visit to U.S. will show progress in some of these field and show progress in dialogue.

People’s Daily: Some say that whether U.S. could ultimately accept China’s rising as an equal is a blind spot, and some say U.S.-China relations in a “tipping Point”. Do you agree with this observation?

Dr. Kissinger: I keep reading these things, and what is the reality? China will be growing, whether we accept it or don’t accept it. And it is a reality so therefore. Of course we should accept China becoming what its population and its resources entitle it to be, that should not even be a debate. We are obliged to work together.

Now When people say the tipping point, I think a confrontation between China and U.S. would be very unfortunate for both sides, neither side can meet such a confrontation, so in the nearly fifty years that I’ve seen this relationship, people talk about a lot of tipping points, but the fact is that eight American presidents have carried out the same policy, five Chinese leaders have carried out the same, so we are obliged to work together, and we should work together.

Dr. Kissinger: I think the presidents of both countries have a focal point in their offices for relations with the other, either a person or a group, so that the two presidents can keep each other informed, and keep in contact with each other.

People’s Daily: This year marks the 70th anniversary of the World War II, how should the U.S. and China work together to uphold the world order after the war? How could U.S. and China play a more constructive role on the global issues?

Dr. Kissinger: You’re too young, but I was a soldier in World War II. I was sent to Europe. We started in England, then we went to France, Belgium and finally Germany, my brother was in Pacific and he was in Okinawa and Korea, so my family had experience of the war, my view is always the same on that subject, China and U.S. should cooperate on maintaining the peace in the world, especially in Asia and that is a joint enterprise.

Dr. Kissinger: Professor Vogel is a good friend, but he is a professor and he has no experience with state visit and it is very difficult for a state visit for the President of China to go out on the street and meet common people, especially in Washington. I think he should have contact to many different aspects of American life and I have met some of your people and I think they are attempting to do this, but in a slightly different way from that of professor Vogel.

People’s Daily: Dr, if you were the Secretary of State today, what’s your advice for president Obama to handle the U.S.-China relations in his remaining time in his presidency?

Dr. Kissinger: It’s only a little more than a year left, so very late to do new things, my view is always be, for every president, it is to tell them to talk honestly to the Chinese, to tell them what their concerns are, to learn Chinese concerns, and try to solve one or two of the obvious problems and I’am sure they are going to do this, I am very confident.

People’s Daily: Thank you so much Dr. Kissinger.