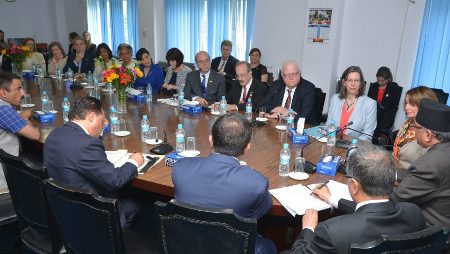 KATHMANDU, May 8 (Nepal Foreign Affairs)– U.S. House Democratic Leader Nancy Pelosi and a bipartisan Congressional delegation has visited Nepal as part of a visit to the country to discuss bilateral relations, regional security and stability, economic growth and trade, and human rights.

“Visiting at this time, we benefitted from learning more about Nepal’s commitment to advancing democracy as we approach the elections next week,” said Leader Pelosi.  “Our primary purpose here is to discuss regional security issues, and also economic issues and the commitment to human rights.  In our meetings, the delegation raised the wellbeing of the thousands of Tibetans who have been living in Nepal for decades as well as the rights of other minorities.”

“There are a lot of disagreements between the parties in Congress, but support for Nepal is not one of them,” said Congressman Sensenbrenner who is co-leading the bipartisan delegation.  “This delegation shows there is bipartisan support for Nepal in the Congress and for the continued steps toward democracy that are being taken here.”

“Our delegation complimented the Nepalese for their cooperation with the Millenium Challenge Corporation,” Leader Pelosi said.  “In the wake of the massive 2015 earthquake, we also learned about the recovery efforts, including those being spearheaded by the United States.”

The delegation also met with Nepal based-NGOs and key members of the civil society community.  Tomorrow, the group is scheduled to meet with the President of Nepal, Bidhya Devi Bhandari.