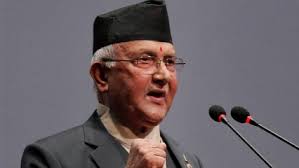 The government on November 13 had scrapped the deal to construct the 1,200-megawatt project signed with China’s Gezhouba Group Corporation (CGGC) citing ‘instructions issued by parliamentary committees’ in September. Chairman Oli remarked that the government meant to hold elections kept itself busy in scrapping and distributing licences instead of maintaining law and order situation for the polls.

“Either the project to construct Budhi Gandaki hydropower shouldn’t have been awarded or the deal shouldn’t have been scrapped after it was signed,” said Oli speaking at an interaction on national economic debate organised by Federation of Nepalese Chambers of Commerce.

“Instead of focusing on law and order situation for the elections, the government has been granting and scrapping licences when it hardly has a month to hold the election. It is an unauthorised decision and the next government will correct it.”

At the same programme, former Finance Minister and Nepali Congress (NC) leader Ram Sharan Mahat said the deal with the controversial Chinese company had to be scrapped as the project was awarded without a competitive bidding process. “The project contract can be awarded to any company based on proper bidding process. I am in favour of that. Budhi Gandaki project was granted to a doubtful Chinese company. It’s good that it has been scrapped,” said the NC leader.

The Sher Bahadur Deuba-led Cabinet has decided to take ahead the construction of Budhi Gandaki project through Investment Board.

Earlier in May, the former Cabinet under CPN (Maoist Centre) Chairman Pushpa Kamal Dahal had decided to award the contract to build the project located in Gorkha and Dhading districts to China CGGC. In June, the then energy minister Janardan Sharma and CGGC President Lv Zexiang had signed a Memorandum of Understanding (MoU) to build the project under the engineering, procurement, construction and finance (EPCF) model. The agreement was signed in the presence of the then PM Dahal and Chinese Ambassador to Nepal Yu Hong.