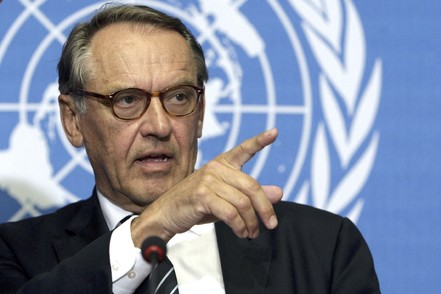 The UN official is visiting the Himalayan country in connection with the UN World Humanitarian Summit scheduled to be held in Istanbul, Turkey on May 23-24, Nepal’s Foreign Ministry Spokesperson Tara Prasad Pokharel told Xinhua.

Jan Eliasson on Saturday held a meeting with Nepalese Foreign Minister Kamal Thapa in Kathmandu and expressed concern over slow pace of reconstruction even one year after the devastating earthquake.

During their meeting, The Nepalese foreign minister told the senior UN official that the reconstruction work couldn’t go ahead as expected due to the unofficial blockade after the country promulgated the constitution in September last year, according to Pokharel.

The UN official is scheduled to call on Prime Minister K.P Sharma Oli and extend an invitation to the latter to attend the UN World Humanitarian Summit. Likewise, he will pay separate call on country’s president Bidya Devi Bhandari during his stay.

The UN official will visit Chautara of Sindhupalchowk District to take stock on the post-earthquake reconstruction works, according to Pokharel.