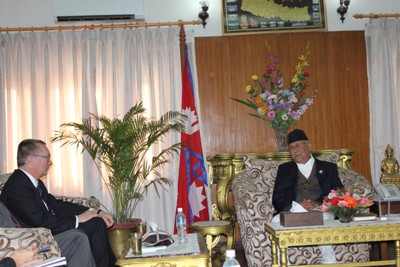 “The President also highlighted the important features of the constitution particularly those contributing to the greater participation and empowerment of women in the country,” according to the foreign ministry. On the occasion, she expressed her appreciation to the role of the UN in the peace process as well as development in Nepal.

Earlier on Friday, Under-Secretary-General Feltman met the prime minister at his official residence in Baluwatar. On the occasion, Feltman conveyed the best wishes as well as the assurance of support expressed by the UN Secretary-General.

On the occasion Nepal-UN partnership over the past six decades was discussed. Feltman also inquired about the Prime Minister’s views on the ongoing dialogues and efforts being made by the Government as well as the major political parties with regard to the concerns expressed by the agitating Madhesi parties about some constitutional provisions.

In the morning, Under-Secretary-General Feltman met with Foreign Secretary Shanker Das Bairagi at the Ministry of Foreign Affairs, Singha Durbar.

Feltman also assured of the United Nations’ continued cooperation to Nepal. The Foreign Secretary also hosted a luncheon today in honour of the Under-Secretary-General.