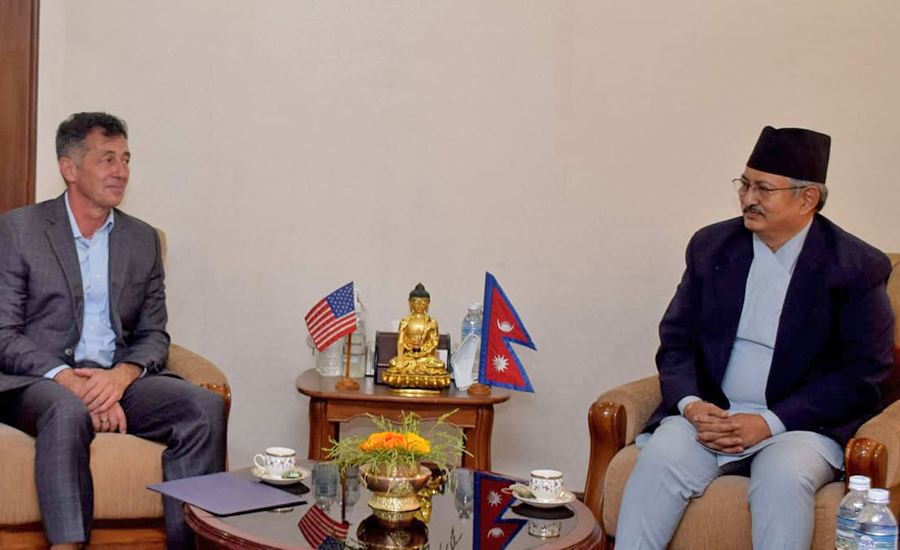 RSS (KATHMANDU, 2 March 2022) – Ambassador of the United States of America to Nepal Randy Berry on Wednesday paid a courtesy call on Home Minister Bal Krishna Khand at the latter’s office in Singha Durbar.

The meeting focused on the relations between Nepal and US and the US-aid Minimum Challenge Corporation (MCC) compact that was recently endorsed by the House of Representatives of Nepal. On the occasion, Minister Khand expressed his gratitude to Ambassador Berry and the US government for their support and assistance relating to the MCC. He also stated that Prime Minister Sher Bahadur Deuba had been firm on endorsing the agreement from the parliament both as a constituent of the government or as opposition party.

“The compact got success as the PM always being serious about the issue became successful in getting support of all political parties being mindful that the coalition government should not get affected as a result. We all Nepali people and the government are happy for the passage of the agreement,” he said. The Government of Nepal was always in favour of further strengthening relations between the two countries, said Minister Khand’s press coordinator Madhusudhan Bhattarai quoting the minister.

In return, stating that the compact got ratified with the clear role of Nepal’s Prime Minister, its government and political parties, Ambassador Berry said that the interpretative declaration from the HoR, Nepal has accommodated the subjects they had been mentioning since the beginning. Praising the Nepal government’s decision to vaccinate refugees against COVID-19, he expressed the hope that the US government would always remain with Nepal on development, prosperity and peace.