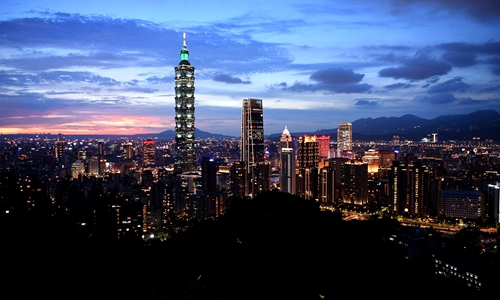 By Global Times (27 March 2020) – US President Donald Trump signed the so-called “Taipei Act” into law on Thursday. On the same day, the number of confirmed COVID-19 cases surpassed 82,000 in the US, making it the country with the most confirmed cases. With such a tense situation in the US, Washington is still manipulating politics. It has become clear why the US has wasted the window period created by China and why it had sat back and watched the situation become worse.

The “Taipei Act” was passed by the US Congress, and was then signed by the president. To a large extent, it represents Washington’s overall attitude toward China: making full use of the Taiwan card to engage in strategic games with the mainland. But this is a bad card, and it is even more counterproductive as the world fights the pandemic.

The “Taipei Act” promises support for Taiwan’s “diplomatic alliances.” To put it plainly, the US is threatening Taiwan’s remaining “diplomatic allies” not to break ties with Taiwan, otherwise it will punish them. This is completely unreasonable. In total, 180 countries, including the US, have established diplomatic relations with China. The one-China principle has long been an international consensus. Can’t other sovereign states make their independent choices? Washington is much too overbearing.

However, this does not work in the current world. Before the “Taipei Act” was issued, Washington had coerced and induced “diplomatic allies” of Taiwan. But what happened then? After Tsai Ing-wen came to power, Taiwan has lost seven “diplomatic allies.” This shows that no country can promote its own will in a way that runs counter to international axioms and harms other countries’ interests, even a country as strong as the US.

Even if the 15 small “diplomatic allies” of Taiwan covet the Democratic Progressive Party (DPP) authority’s petty favors, fear Washington’s intimidation and choose not to break “diplomatic ties” with Taiwan, then what? How much international space does Taiwan have? After all, the “Taipei Act” only provides little psychological comfort to the DPP authority. Washington politicians are aware of this, and thus the wording of the act is mostly insincere.

A Taiwan politician questioned the content of the “Taipei Act” on strengthening trade between the US and Taiwan: “If the US requires us to import US pork and beef that contains clenbuterol, do we accept it?” The chief of Taiwan’s executive body Su Tseng-chang dared not answer explicitly. Obviously, the DPP has betrayed Taiwan’s interests for Washington’s empty political promise. This is a terrible deal for Taiwan. Some Taiwan netizens are much too clear about this. They said, “The bill is signed, so what? It is useless.” “It is an old trick of cheating money. We are being used again.”

The Taiwan question concerns China’s core interests and must not be challenged. Since the DPP came to power, it has made many small moves with a tendency of secession and was encouraged by Washington. Take the “Taipei Act.” It has brought greater uncertainty to the situation across the Taiwan Straits. But the initiative of the situation is held firmly in the hands of the mainland. China’s determination to reunify Taiwan island is unshakable, and whoever acts against it will end up in ruins. The DPP must not have any illusion about this.