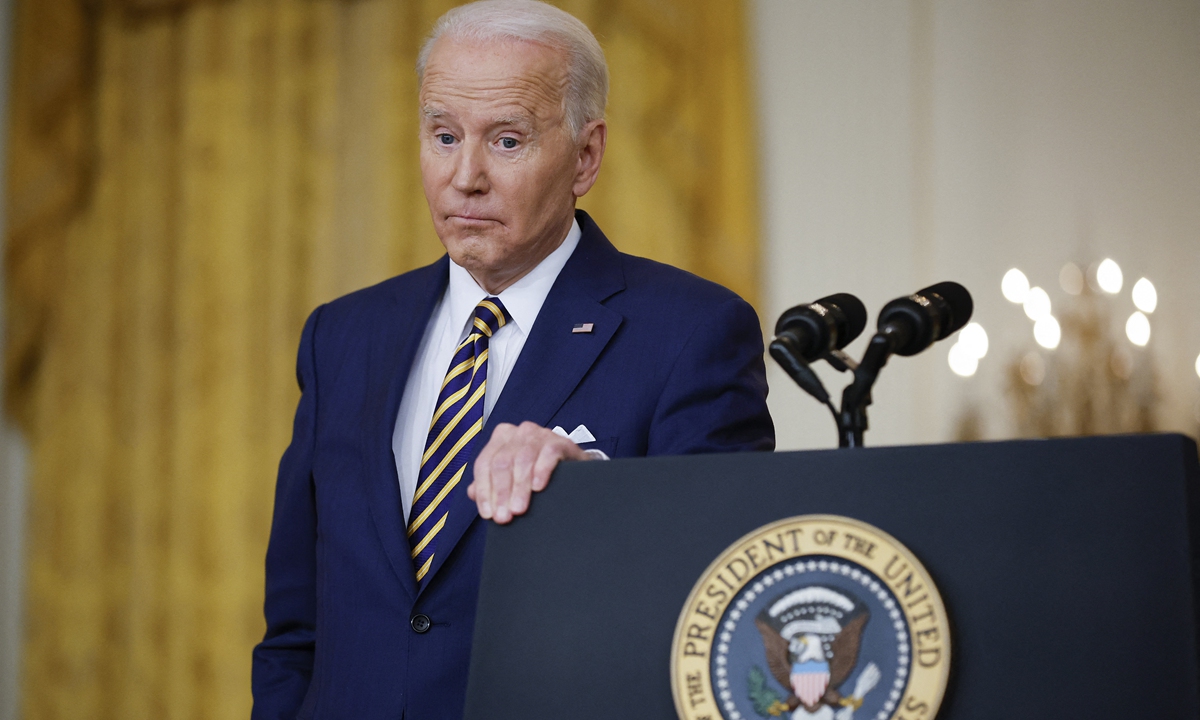 By Xin Ping (Global Times, 24 January 2022) – January 20 marks the one-year anniversary of President Joe Biden’s presidency. To its allies and partners, Biden’s announcement that “America is back” brought much hope and confidence. One year has passed, and US has by no means become a “beacon of democracy” to light other countries, but instead brought darkness to the world.

The US came to Afghanistan with resolve and ambition but ended up with chaos and suffering. Over the past two decades, the democracy experiment in Afghanistan has cost $2 trillion, 100,000 civilian casualties, and death of over 2,000 US soldiers. It has turned this country into a hell-like place rather than a “paradise of democracy” as promised by the US. The hasty withdrawal of US troops left with such bloody scenes as American soldiers shooting civilians and Afghan young men falling from a US military cargo plane. It remains a permanent scar for US democracy and morality. Be it Vietnam, Iraq, Syria or Afghanistan, wherever US democracy is imposed, there has always been destruction and misery. Uncle Sam is the “Weapon of Mass Destruction” itself.

Despite the rosy pictures painted by the Biden administration to help the global fight against COVID-19, the world has only seen the US hypocrisy and “America first” in global vaccine distribution. It has been hoarding vaccines well beyond its needs and dumping defective or nearly-expired vaccines to developing countries. Instead of leaving origin-tracing to scientists, the US government appointed the intelligence community to concoct a so-called “review,” relentlessly scapegoating other countries and hyping the lab-leak theory. In the face of the virus, the US has barely done anything good. Uncle Sam’s promises are no more than lip service.

To save the US economy from sliding into a mess, the Biden administration has resorted to rounds of quantitative easing and large-scale stimulus packages, resulting in high inflation. By December 2021, America’s CPI registered a record high in four decades, with a 6.8 percent growth year-on-year. The US Congressional Budget Office estimated that federal debt will be mounted to $33.33 trillion. Yet the Federal Reserve continues to introduce reckless QEs. The irresponsible monetary policies by the US spilled over to exacerbate global inflation and the whole world has to pay the price: global commodity prices skyrocketed by 20 percent, and crude oil prices exceeded 80 dollars per barrel. Indeed, the US is best at exporting inflation.

The US contributed directly to global supply chain disruptions. Its loose COVID protocols led to outbreaks in American ports, leading to insufficient labor and overstocked commodities. The Biden administration also hastily introduced high unemployment benefits, which worsened labor shortages. The result is that global freight costs were driven to an unbearable level. Taking the China-US route as an example, freight rates per container soared from $1,500 in 2019 to $28,000 at one point and still remained at a high level. To keep the skeleton in its own cupboard, the US once again shifted blame to China, smearing China’s zero-COVID policy as an obstacle to the recovery of global transportation and the root cause of the global supply chain crisis. Ironically, China’s trade in 2021 exceeded $6 trillion, growing by more than 20 percent year-on-year. It’s clear who the real troublemaker is.

President Biden claimed that his administration will uphold multilateralism. However, it turned out to be pseudo multilateralism or coterie-lism driven by ideological confrontation. The US rallied its allies and partners worldwide to create small cliques and blocs such as G7, Five Eyes, QUAD and AUKUS, trying to divide the world into different camps, just like what it did during the Cold War. It vows to promote a “rule-based international order,”  but everything it has done runs contrary. As more countries are suffering from America’s unilateral sanctions, long-arm jurisdiction, and coercion, the so-called “rules” are none other than the American rules that serve its own interests and hegemony.

There are no stones left unturned for the US to maintain its dominant position in technology. The enactment of the Endless Frontier Act demonstrated that America would go further down the path of decoupling. From sanctioning specific companies to blocking the whole industry, from technology control to cutting off academic exchanges, the US has laid its intention on the ground: suppress China’s development. Do not forget that development can only be achieved through cooperation rather than isolation. Decoupling with China means decoupling with the world and the future.

According to the Nuclear Non-Proliferation Treaty, non-nuclear states could only use nuclear power for peaceful purposes under supervision and guidance. Nuclear submarines as strategic weapons apparently don’t fit into the category of peaceful use. But the US insisted on creating AUKUS to assist Australia, a non-nuclear state, in building at least eight nuclear submarines, which will very likely spark an arms race and damage peace and stability in the Asia-Pacific. The Pandora’s Box of nuclear proliferation has been wantonly opened by the US. Playing with fire will only burn itself.

Dead end for US democracy

The US held the so-called Summit for Democracy despite a major landslide at home and the chaos it caused abroad. US democracy has now been plagued by partisan divisions, plutocracy, and social injustice. At the summit, the president of Argentina exposed America’s hypocrisy by openly criticizing its dark track records in Latin America. Even Foreign Policy admitted: What is Biden’s Democracy Summit Missing? It misses the power of people. Democracy is never a fixed formula, but an idea of people’s sovereignty. By pointing fingers at other countries’ political systems, the US only makes its own democracy questioned and embarrassed.

Indeed, “America is back,” so are bullying, hegemony and confrontation. If these are what the US brings back to the world, it would be better that it never comes back.

The author is a commentator on international affairs, writing regularly for Global Times, China Daily, etc. He can be reached at [email protected]